MURFREESBORO – For the first time in Chowan University football’s Division II history, a true freshman has led the Hawks to victory in their debut and it came in dramatic fashion. 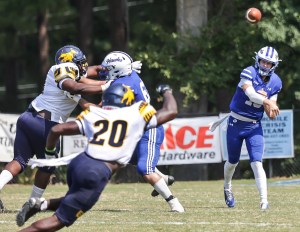 True freshman Caleb Pierce made his collegiate debut a memorable one, throwing for 237 yards and two touchdowns, including a game-winning 28-yarder to EJ Gatling with nine seconds remaining to spark Chowan to a thrilling 32-29 win at home on Saturday vs. Johnson C. Smith University. Photo by Charles Revelle

Caleb Pierce found EJ Gatling for a 28-yard touchdown with nine seconds for the go-ahead score in a 32-29 comeback victory over Johnson C. Smith in CIAA action here Saturday.

It marked Chowan’s first win of the season after two close losses to start the 2022 campaign.

Pierce (14-of-18 through the air) threw for 237 yards and two touchdowns while adding 65 yards rushing.

Gatling collected two touchdowns in the contest with a 50 yard rushing touchdown in the opening period and his 28-yard game-winning grab with the game on the line.

Jordaan Bailey had five receptions for 73 yards. Justin Anderson hauled in a touchdown and a two-point conversion.

The Chowan defense was vital late in the game as Johnson C. Smith was threating to extend their 26-24 lead by driving deep into Hawks territory with time winding down. But Chowan held their ground, forcing a 28-yard field goal with 1:08 remaining that gave the visitors a 29-24 lead.

After a sack on second down on the game’s ensuing possession, the Hawks were forced to call their final timeout with 44 seconds remaining. Chowan benefitted from a pass interference penalty against JCSU as Pierce was looking his high school teammate, Bailey. Pierce then would connect with Bailey over the middle for a gain of 32 yards down to the JCSU 28.

After a spike to stop the clock, Pierce stepped up into the pocket and found Gatling in the middle of the endzone for the touchdown with nine seconds remaining. Pierce connected with Anderson for the two-point conversion to put the Hawks up 32-29.

A pair of JCSU passes were well defended by the Hawks before Blank put the finishing touches on the comeback win with a sack to end the game.

The day didn’t start well for Pierce as he was intercepted near midfield. Johnson C. Smith then went on a six-play, 43-yard drive, capped by Tyreik Leach’s two-yard TD run and the PAT by Jay Haggins for a 7-0 lead less than four minutes into the game. 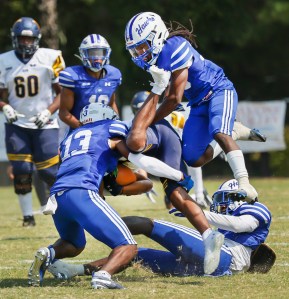 The Chowan defense gobbles up a Johnson C. Smith player during Saturday’s CIAA opener in Murfreesboro. Photo by Charles Revelle

After a pair of punts, the Hawks would start their next drive in the shadow of their own goal-line at its four yardline. Peoples gave the Hawks breathing room with a 29-yard run and would add a 15-yard scamper. Gatling, on an end around, then raced 50 yards for the score. Kyle Lotz booted the PAT to tie the score at 7-7 late in the first quarter.

On the first play of the second quarter, JCSU quickly regained the lead at 14-7 on an 86-yard pass play from Tyrell Jackson to Brevin Caldwell.

Chowan would answer on their next drive, taking six plays to reach the endzone. Pierce found Demetrius Moore for a first down reception before Peoples had runs of 19 and 28 yards to even the score at 14-14 with 12:18 left until halftime.

Chowan took its first lead of the game, 17-14, just past the midway mark of the third quarter when Lotz nailed a 32-yard field goal to end a nine-play drive.

The Chowan defense would force a punt, but a fumble on the return would hand the ball back to the Golden Bulls. Several penalties on the drive for JCSU would not gain much ground as the Golden Bulls settled for a 29 yard field goal to even the score at 17-17 with 3:01 remaining in the third quarter.

On the ensuing kick-off, another miscue by the Chowan special teams unit gave the Golden Bulls the ball near midfield. Malik Rencher came up with an interception on the next play, but that effort was negated by a roughing the passer penalty on the Hawks. JCSU would move inside the redzone before Moore and Shaun’dell Hawkins teamed up for a sack on third down to force a field goal. Haggins connected from 37 yards as JCSU regained the lead at 20-17 with less than one minute left in the period.

On the game’s ensuing series, the Hawks drove 72 yards in seven plays capped by Pierce connecting with Anderson, another of his former teammates in high school, for a 25 yard touchdown. Lotz added the PAT as momentum swung back to Chowan with their 24-20 lead with 13:32 remaining.

The Golden Bulls would claw back into the contest with an eight-play, 50-yard drive and reclaimed the lead at 26-24 on a 15-yard touchdown pass from Jackson to Caldwell with 8:30 left.

Chowan (1-2 overall; 1-0 in league play) will wrap up their homestand to start the season as the Hawks will host Winston-Salem State in a CIAA contest under the lights on Saturday, Sept. 24. Kick-off is slated for 6 pm.