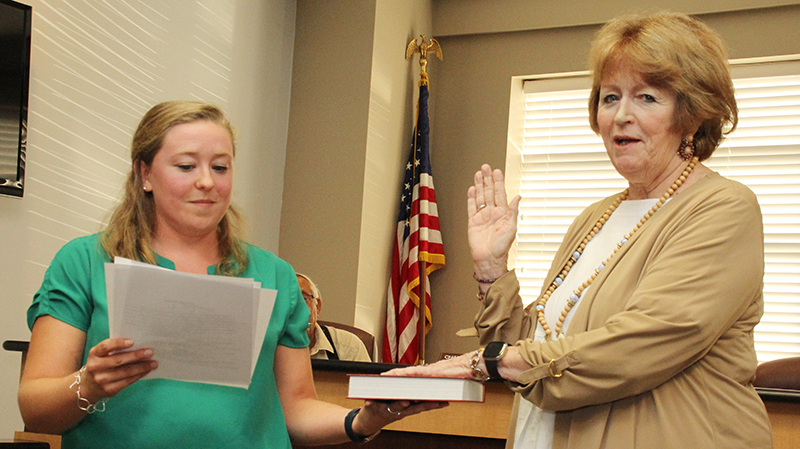 AHOSKIE – A former public official has come out of retirement to fill an empty seat on the Ahoskie Town Council.

Linda Blackburn, who served the town as its Mayor over an eight-year period (2003-11), has been appointed to fill unexpired term of Councilman Matt Bradley.

Bradley, first elected as a Ward A Councilman in November of 2015 and reelected in 2019, earlier informed town officials that he and his family are moving to a new home in Hertford County, but outside of Ahoskie’s corporate limits. The town’s bylaws require its elected officials to reside within the corporate limits.

“Due to me and my family moving out of town in a couple of weeks, I’ve been forced to resign my position on the Council,” stated Bradley at the outset of Tuesday’s regularly scheduled meeting. “I’ve thoroughly enjoyed working with each one of you on the Council as well as working with the citizens of this town and the town staff. We’ve been able to do a lot of things during my time on the Council without raising rates. We’ve done a lot with a little bit.

“If there’s ever anything I can do for any of ya’ll, you have my phone number. I may be moving out of town, but I’ll be happy to help in any way I can,” Bradley added.

“Thank you, Councilman Bradley, for your service to the Town of Ahoskie and our residents. We wish you well,” said Mayor Weyling White as Bradley left the meeting room to a standing ovation.

Bradley had earlier recommended Blackburn to serve out his unexpired term on the Council (which, if he wasn’t reelected, would have ended in December of 2023). Councilman Charles Reynolds motioned to accept that recommendation, with a second from Councilman Charles Freeman. The motion was approved without objection.

Blackburn was then sworn in by Town Clerk Jennifer Bracy.

“Thank you for allowing me this opportunity to serve the citizens of Ahoskie,” said Blackburn as she took her seat.

This isn’t the first time that Blackburn has been chosen to fill an unexpired term on the Ahoskie Town Council.

In December of 2012, Blackburn was the Council’s choice to fill the unexpired term of longtime Councilman O.S. “Buck” Suiter Jr. who resigned his seat effective at the close of the board’s November 2012 meeting. At that time, Suiter had one year remaining on his four-year term.

She successfully ran for Council in 2013, serving a four-year term before retiring from office in 2017.

In her initial attempt at local politics, Blackburn made history in 2003 by becoming the first-ever female elected as Ahoskie Mayor. She served in that capacity until 2011 where she was defeated by Brien Lassiter in her quest for another term.

During her time as Mayor, Blackburn was instrumental in helping to guide the town in the building of a new police station, new wastewater treatment plant, and the Ahoskie Creek Recreation Complex, to include the Ahoskie Amphitheater.