MURFREESBORO – Chowan’s defense held Tusculum to just a field goal in the second half, but the offense, after scoring a trio of first half touchdowns, failed to find the endzone as the Hawks suffered a 23-21 loss at home on Saturday afternoon. 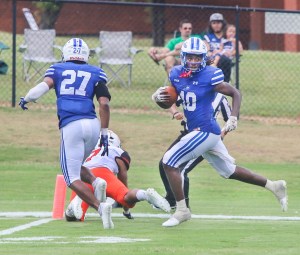 Chowan’s Jordaan Bailey (right) strides into the endzone during Saturday’s home game vs. Tusculum. Bailey finished as Chowan’s top receiver (2 catches for 58 yards) and rusher (2 attempts for 33 yards) but the Hawks suffered a narrow 23-21 setback. Photo by Quiwania Miller

Montre Moore had a career day on defense with 16 tackles, 3.0 TFLs, 1.0 sack and a forced fumble. That effort netted Moore the honor of being named as the CIAA Linebacker of the Week.

Jordaan Bailey scored twice for the Hawks, one rushing and one receiving. Mailk Tobias accounted for one receiving touchdown.

The defense forced two interceptions and four fumbles on the day as the Hawks were on the field for 79 plays and just over 33 minutes.

After each team punted to open the contest, Tusculum would take a 7-0 lead as a pair of long receptions allowed the Pioneers to strike from inside the redzone on a slant route.

The Hawks would answer on their next drive as Max Smyth connected with Demetrius Moore for a pair of receptions. Smyth found Bailey down the left sideline for a 43-yard touchdown to knot the contest at 7-all.

The turning point of the quarter came on the Pioneers’ next drive. The defense would force a punt, but a muffed attempt near the goal line allowed Tusculum to pounce on the ball in the endzone for the score to go up 14-7.

The defense continued to stand tall for the Hawks in the second quarter as a sack by Raydarius Freeman at midfield ended the Pioneers’ drive. Chowan mustered 21 yards of offense before stalling out at the TU 29 on fourth down.

Chowan’s defense continued to dig deep, forcing another turnover on downs near midfield as Moore sniffed out a QB keeper on fourth-and-one. The Hawks would capitalize on the good field position on their next drive as a pass interference call aided the Hawks down the field. Tyrek McNeil picked up a first down run before an end-around by Bailey from 28 yards out evened the score at 14-all.

Tusculum answered with an 11 play 63-yard drive as the Pioneers missed the extra point to lead 20-14.

With 2:05 remaining in the half, Chowan would set up near midfield after a strong return by Jakob Streeter out to the CU 45. A pass interference moved the ball to the TU 40 before Smyth found Tobias all alone for the long score. Kyle Lotz converted the PAT to give the Hawks a 21-20 lead before the half. 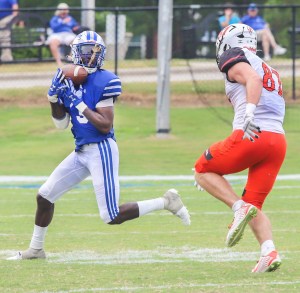 The only points of the second half came on a 23-yard field goal by Tusculum at the 8:03 mark of the third quarter.

To open up the fourth quarter, Tusculum attempted a 39-yard field goal that would be blocked by Traevon Mitchell and returned to the CU 29 by Jakob Streeter. A sack would stall the Hawks’ drive.

Chowan’s defense continued to play stellar as Carey intercepted the overthrown pass and return it out to the CU 45. The offense squandered the takeaway and was forced to punt on their next drive.

Tusculum’s next possession ended the same way as Simeon Burns picked off a tipped pass to give the Hawks the ball at midfield. Two plays later, the offense would give the ball back to Tusculum on an interception.

Once again, the defense stood up to the task as Moore collected a sack to end the Tusculum drive. The Pioneers’ punter pinned the Hawks at their own six-yard line.

Both teams were forced to punt on their next drives as Tusculum would once again pin the Hawks deep in their own territory. Chowan was unable to move the ball on the final drive to end the contest.