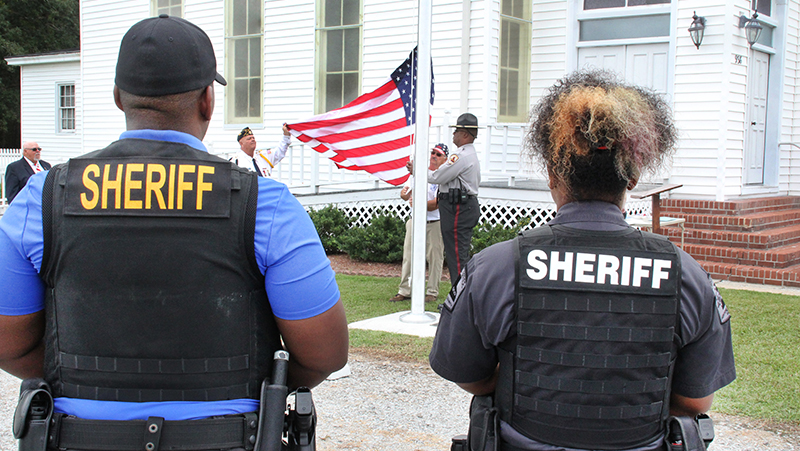 Despite the passage of over 20 years, it’s impossible to erase the horrific images of Sept. 11, 2001 etched in the minds of Americans. 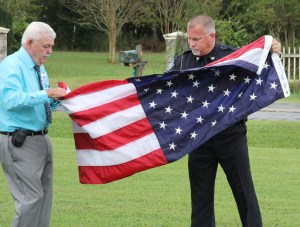 But yet that day serves as a gentle reminder of the daily sacrifices made by those who rush towards danger rather than retreat.

“Fire, rescue and law enforcement personnel serve us in so many ways. They have the skills to help us and to care for us,” said Rev. Willie McLawhorn of Menola Baptist Church. “We honor those who still steadfastly provide those skills and we pay tribute to those who have given their lives in service to our nation and our community. They all serve or served without recognition.”

JoAnn Nelson, president of Murfreesboro Chapter 862, said since 2002, Woodmen Life chapters across the country have been dedicating flagpoles and presenting American flags not only to honor the heroes and victims of the Sept. 11, 2001, but also to remember the men and women of America’s Armed Forces.

“In addition, these dedication services pay tribute to the men and women in this community who risk their lives daily to keep us safe. Police officers, firefighters, and rescue personnel all deserve our thanks and admiration,” Nelson stated.

She added that over 4,500 flagpoles have been dedicated to these individuals during special ceremonies held by Woodmen Life chapters across the nation. Hundreds more will be dedicated this year.

“We can’t think of a more special way to honor them by the sight of the American flag flying proudly,” Nelson noted. “Our nation’s flag atop the flagpole serves as a symbol of the enduring spirit of all Americans.

“Fraternalism and patriotism stand at the core of Woodmen Life,” she continued. “They are the fabric of what makes us what we are. For more than 120 years, Woodmen Life has strived to promote family, community, and country. Since 1947 our chapters have presented more than two million American flags to community based organizations across this nation. We have presented over 285,000 American History Awards to students in elementary, junior and senior high schools.”

Edward Nelson of Woodmen Life Chapter 862 formally presented the flag to Edna Burkett of Menola Baptist Church. Ray Burkett of the St. John Fire Department was joined by Hertford County Sheriff Dexter Hayes in raising the flag before lowering it to half staff.

Those assembled then recited the Pledge of Allegiance followed by the playing of “God Bless America.”

Jon Northcott, Chairman of the Board of Deacons at Menola Baptist Church, closed the ceremony with remarks. He thanked Woodmen Life for their donation of the flag and the flagpole. Northcott also thanked the volunteers who installed the flagpole and spotlight: Milton Vaughan, Ray Burkett, Tim Newsome Jr. and Daniel Haggett.

On Sunday, a light rain failed to dampen the spirits of those gathered at Center Grove Baptist Church.

‘This flagpole is erected in remembrance of the events that unfolded on Sept. 11, 2001,” said Rev. Roger Kiker, pastor at Center Grove. ‘We dedicate this flag and new flagpole to the heroes and victims of that tragic day and to all who continue today to keep us safe and free. There were a lot of brave souls on 9-11 who rushed in to help those who were trapped and injured. We want to remember them.

“We have people here in our little community – firemen, rescue personnel, police, and nurses – who serve and protect us. We are thankful for them,” Rev. Kiker added.

“Twenty-one years ago we experienced horrors that we never thought would occur in this land of freedom and opportunity,” Hollowell remarked. “Thousands of our citizens and those from other countries lost their lives in the terrorist attacks in New York City, Washington, DC, and in Pennsylvania. Hundreds of heroes materialized during and after those attacks and it’s to them and those still fighting today to strengthen our freedom that we dedicate this ceremony.

“On this, the 21st anniversary of the attack, we all remember where we were and what we were doing on the morning of Sept. 11, 2001,” she added. “The events of that day changed our lives forever, making us realize that freedom is a precious thing and it’s not to be taken lightly.”

Ahoskie Police Chief Jimmy Asbell and Joe Dilday of Center Grove Baptist Church raised the flag, lowering it to half staff, followed by the audience reciting the Pledge of Allegiance.

At the base of the newly erected flagpoles at both churches contains a plaque that reads: “In Honor and Remembrance of the Heroes and Victims in the Fight Against Terrorism and to Celebrate the Enduring Spirit of All Americans.”