Camden uses big second half to down Red Barons

GATESVILLE – Camden County scored four times in the second half, pulling away from a 14-0 halftime lead en route to a 40-6 win over Gates County here Friday night in non-conference football action. 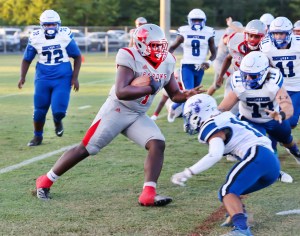 Gates County’s Damari Cooper (#1) looks for a crease in the Camden defense during Friday’s non-conference contest. Cooper rushed for 61 yards and blocked a pair of PAT kicks, but the Red Barons fell, 40-6. Photo by Charles Revelle

The Bruins improved to 3-0 with the win while the Red Barons saw their record even at 2-2.

Leading by two touchdowns at halftime, Camden increased that advantage to three scores on their first drive of the second half. Highlighted by a 35-yard scamper by quarterback J’ron Pendleton, the Bruins drove 75 yards in seven plays capped by Malachi Wilson’s one-yard plunge to paydirt. The conversion failed, but Camden held a 20-0 lead at the 8:41 mark of the third quarter.

Gates County found some life when Semaj Cross returned the ensuing kickoff 77 yards down to Camden’s 17 yardline. Three consecutive plays – runs of four, three, and four yards respectively by Dorien Melton, Noah Harris, and Jeremiah Dillard – produced a first-and-goal for the Red Barons at the six yardline. Three snaps later, Melton muscled into the endzone from one yard out and while the conversion run failed, Gates County had trimmed their deficit to 20-6 with 5:43 left in the third period.

Unfortunately for the home team, that’s as close as it got.

On first down of Camden’s ensuing possession, Jaden Clark reeled off a 54-yard run. One play later, Wilson scored from three yards out. Gates County defender Damari Cooper blocked the PAT kick, but the Bruins had stretched their lead back to 20 points (26-6) with 5:08 remaining in the quarter.

The Red Barons tried to respond, using the legs of Melton and Cooper to grind out a 10-play drive that reached Camden’s 37 yardline. However, a fourth down run failed to move the chains on the first snap of the fourth quarter.

The Bruins iced away the game at that point, driving 63 yards in eight plays capped by Clark’s 12-yard scamper to paydirt.

The Bruins opened up with a pair of first-half scores on touchdown runs of seven and nine yards by Clark and Pendleton respectively. Another scoring opportunity by Camden ended at the Gates County one yardline where Red Barons defender A.J. Hart picked off a pass.

The Red Barons mounted one offensive threat over the opening 24 minutes, using a 27-yard scamper by Cross to highlight a six play, 42-yard drive that reached Camden’s 38 yardline. They lost possession on downs at that point.

The Red Barons will travel to Williamston this Friday (Sept. 16) for their conference opener against unbeaten Riverside High School (4-0). Kick-off is at 7 p.m.