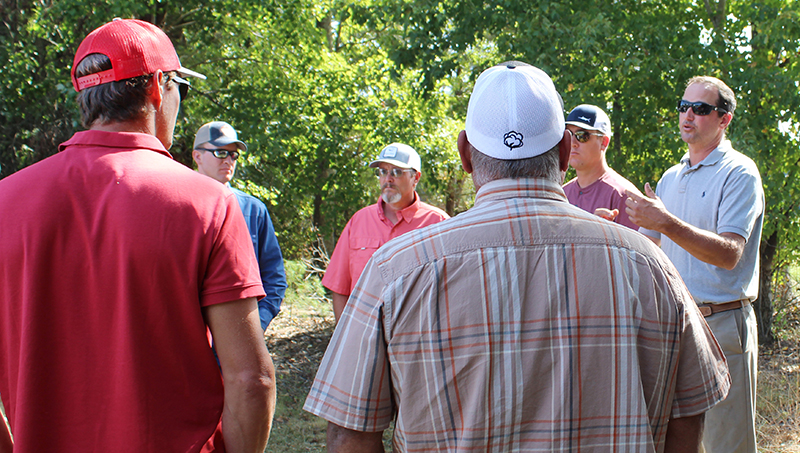 Donny Lassiter (right) chats with farmers from southwestern and western states who participated in the annual Producer Information Exchange tour during one of its stops in North Carolina last week. Staff Photo by Holly Taylor

LASKER – There’s well over 1,000 miles of difference between the Roanoke-Chowan area and the southwestern United States, but cotton is something both areas hold in common. 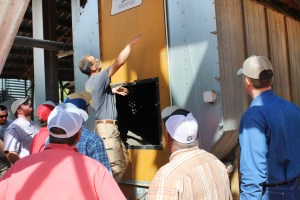 Mark Lassiter demonstrates how recently harvested corn is dried in one of the bins at Lassiter Farms. Staff Photo by Holly Taylor

The group of 16 producers – who hailed from Texas, Oklahoma, Kansas, Arizona, and California – began their day Thursday morning by visiting Lassiter Farms, located outside of Lasker.

Donny and Mark Lassiter, brothers who now run the farm operation together in the footsteps of their parents, shared information about the kinds of crops they grow, what kinds of equipment they use, and methods to ensure a good harvest. Fellow local farmer, Brandon Belch of Conway, also attended the tour to share his own experiences.

In addition to focusing on cotton production, the Lassiter brothers explained the inner workings of their grain elevator (currently being used to dry recently harvested corn) and displayed equipment used for harvesting and hauling peanuts. Much of the climate in the regions where the visiting producers are from are unable to sustain growing those kinds of crops.

“The overall theme for farmers now is diversification. It’s where everybody’s headed. Everybody’s trying something different,” said Landon Mires, who hails from a small town south of Lubbock, Texas.

His family’s farming operation consists mostly of cotton production, along with smaller amounts of grain sorghum and wheat as well as some cattle. They get by on as little as 12 inches of rainfall per year sometimes.

Despite the different weather conditions, however, Mires said he’s discovered that the farming practices itself are still quite similar.

John Walker from Stamford, TX agreed, explaining that the amount of moisture is really the biggest difference between farming operations in both areas.

“We farm cotton and wheat on a 50/50 rotation,” Walker said. “We’re totally dry land where I am. We raise wheat so we can raise better cotton, and we let the ground sit fallow all summer to gain moisture.” 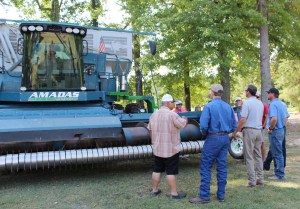 The Producer Information Exchange tour included an explanation of how peanuts are harvested in Northampton County. Staff Photo by Holly Taylor

Both Walker and Mires said they enjoyed getting a chance to meet with other farmers and talk about agriculture in different areas.

“Everybody’s trying something new, and it’s good to get new ideas from time to time,” Mires said.

“We get to come out and look. Get to compare notes,” Walker added. “It’s pretty neat. And it’s been a lot of fun.”

Donny Lassiter said he’d participated in the PIE tour in the past to visit parts of Texas. That experience was why he offered to host a stop on this year’s tour.

“It’s a great opportunity, and a win-win. Hopefully they’ll learn something and I can learn something too,” he said. “We’re growing the same crop, but there’s a lot of differences. And when you can look through both lenses and see that everybody’s working together, it makes it a whole lot better.”

Following the tour of Lassiter Farms, the group made a stop for lunch and then spent the afternoon and evening visiting farmers around the Gaston area of Northampton County.

Earlier in the week, the tour group visited the headquarters for BASF Agricultural Solutions, located just outside of Raleigh. BASF helps sponsor the PIE program each year. During the weeklong tour, the group also visited local farmers and agricultural suppliers in Pikeville, Newton Grove, Kinston, Greenville, and Pantego.

The PIE program first began in 1989 and has exposed more than 1,200 U.S. cotton producers to innovative production practices throughout the whole “Cotton Belt” region. The goal of the program is to help farmers maximize production efficiency and improve yields by learning more about diverse farming practices in other areas of the country.