Special to the R-C News-Herald

MURFREESBORO – In its inaugural edition it has all the hallmarks of the start of a great rivalry on the gridiron in everything but the final score.

Barton College (1-0), playing in just its third season of intercollegiate football, pinned a 17-3 loss on Chowan University in a rare Thursday night contest, leaving the Hawks 0-1 after falling in the season opener here at Garrison Stadium. 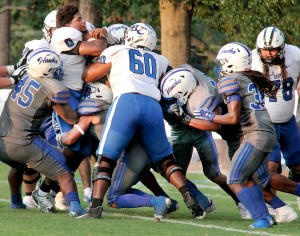 The two schools hope to schedule each other again in upcoming seasons. They are rivals in every sport but football in Conference Carolinas. However, Barton’s football league is the South Atlantic Conference, while Chowan plays in the CIAA.

Bulldogs sophomore Jordan Terrell showed why he’s one of the top running backs in the nation, putting up 178 of the ‘Dogs 247 total rushing yards.

But despite the 14-point difference in Barton’s 413 yards of total offense, the result could’ve been much higher for the visitors but for some stellar play from the Chowan defense that accounted for a pair of red-zone interceptions and a blocked field goal attempt.

Montre Moore led the home-team defenders with nine tackles while teammate Kmare Carey posted six tackles, an interception, and a blocked punt; all key in keeping the Bulldogs out of the end zone.

Offensively for the Hawks, quarterbacks Max Smyth and Rashad McKee spent time under center, passing for a combined 124 yards with Laurence King their favorite target as he collected 76 yards on five receptions. Jaylon Boyd and Tyrek McNeil shouldered the load on the ground putting up near identical rushing numbers of 64 and 63 yards, respectively.

Chowan’s only points came off the foot of kicker Kyle Lotz to stroked a 40-yarder in the third quarter that got the Hawks within seven (10-3).

“Losing’s never fun,” admitted second-year Chowan coach Mark Hall. “We didn’t play well enough to win tonight and now we just have to come back on Sunday and get better.”

Neither team scored on their opening possessions. While Chowan’s second touch of the ball was also futile, Barton’s was more successful; going 68 yards in one play, Jaquan Lynch to Cameron Johnson, followed by Brooks Jackson’s PAT kick for a 7-0 lead at the 10-minute mark.

Chowan tried to answer – Smyth hitting King for a 33-yard gain, the key play of a drive to the Barton 29 yard line. But Smyth was sacked for a loss back to the 40 and Chowan was forced to punt.

Barton then started a grind-it-out third drive of 16 plays into the red zone, but Lynch was picked by Chowan’s Malik Rencher, foiling a chance to score. Just one play later, Smyth gave it right back with a pick and this theft was returned to the Chowan 45-yard line. Eight plays following the interception, Jackson booted through a 31-yard field goal attempt for a 10-0 Bulldog advantage.

The next three series’ included miscues by both teams with another Barton interception, a Chowan fumble, and a Jackson field-goal attempt blocked by the Hawks’ Jordan Brown with under a minute and a half left until halftime. The first two quarters ended with Barton’s 10-0 lead taking the two teams to the mid-break.

On the opening drive of the half, Chowan’s defense forced a three-and-out, then Carey partially blocked a punt and set the Hawks up near midfield.

McKeel relieved Smyth at quarterback and Chowan drove to the Barton 16, but a third down pass-broken-up ended the drive.

Barton drove to the Chowan one-yard line, but the Hawks’ Simeon Burns forced a fumble at the goal line to end another Bulldog threat.

McKeel then engineered an 11-play drive highlighted by a 24-yard strike to King, but the drive would stall forcing the long field goal by Lotz to make the score 10-3 that carried to the end of the quarter.

The two teams exchanged punts opening the fourth quarter before the Bulldogs used four rushes by Terrell and a long pass play before Terrell barreled in from eight yards out for the Bulldogs second touchdown and a 17-3 lead.

Chowan then drove to the Barton 11, but a fourth-down pass attempt fell incomplete. With under five minutes to go, Barton went back to ball control. Six rushes from Terrell and a kneel-down was enough to run out the clock.

“Our defense played well,” noted Hall. “We put them in bad spots all night long and held them to just 17 points; but if we hold a team to that many points I think we should win every time. But our offense had too many three-and-outs and too many turnovers. We just didn’t function well at all.

“This week we’ve got to figure out what’s going on at the quarterback position, gotta get more consistent in the red-zone, do our job, and clean up the mental mistakes,” the coach concluded. “We’ll evaluate the film, get after it in practice….just compete.”