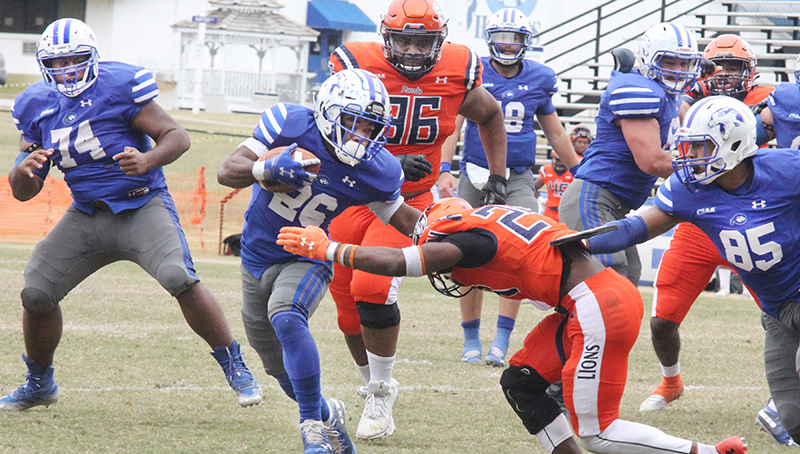 Redshirt junior Tyrek McNeil (left) is among the returning players for Chowan University. The Hawks host Barton College at 6 p.m. on Thursday at Garrison Stadium in Murfreesboro in the season opener for both teams. File Photo by Cal Bryant

MURFREESBORO – There’s no better way to start a college football season than to butt heads with a regional rival.

That’s what is on tap for Thursday evening in Murfreesboro where Chowan University hosts Barton College in a non-conference clash at James G. Garrison Stadium. Kick-off is slated for 6 p.m.

Chowan is coming off their best season during the NCAA era, finishing at 7-3 overall during the 2021 campaign.

In its first full season as an intercollegiate program, Barton posted a 6-5 overall record in 2021. Among their wins was a 26-20 overtime thriller against nationally ranked Wingate.

Chowan and Barton are members of Conference Carolinas in all sports but football. On the gridiron, Chowan is a member of the Central Intercollegiate Athletic Association (CIAA) while Barton is competing as an Associate Member of the South Atlantic Conference this year and in 2023.

Thursday’s contest in Murfreesboro matches two teams that were selected in the middle of their respective conferences during the 2022 pre-season balloting.

Chowan was selected to finish fifth overall and third in the Northern Division of the CIAA. The Hawks collected five All-CIAA Preseason selections with CIAA Defensive Rookie of the Year Isaac Anderson leading the way. Joining Anderson on the list were David Keck, All-CIAA First Team Offensive Lineman and Laurence King, All-CIAA Second Team Receiver. Adding to the selections were Jeremiah Smith (Tight End) and Simeon Burns (Defensive Back).

The biggest question coming into the 2022 season for the Hawks is who will replace Bryce Witt as the signal caller? The Hawks have five quarterbacks listed on the roster, none of which were on the team last season.

King and Malik Tobias should be the favorite targets for whomever the quarterback will be this season as they combined for 69 receptions, 931 yards and 12 touchdowns a year ago. Tyrek McNeil and Jaylon Boyd return in the offensive backfield, combining for 841 yards and six scores in 2021.

On the offensive line, the Hawks return four of the five starters from a season ago, to include Keck.

There are several familiar faces on the defense led by defensive coordinator Colin Neely. Simeon along with Caleb Hester, J’Vin Farmer, and Keshawn Pickett will look to continue the strong push from the defense that allowed a program-low 22.6 points per game last season.

Terrell finished second in the nation in rushing yards (1,863) and third in rushing yards per game (167.5) to go along with 15 touchdowns and three games of 200-plus yards last fall. Terrell was a first-team All-Southeast Region pick as well in 2021 while Brooks connected on 15-of-19 field goal attempts and totaled 78 points.

Mark Hall enters his 15th season with the Chowan football program and second as head coach after spending the previous 12 seasons as the Offensive Coordinator and the Quarterbacks/Wide Receivers coach.

In his first season at the helm, Hall and company would produce the best season in the NCAA era. The Hawks won their first five games of the season, leading to the program’s first-ever national ranking checking in at #25 in the AFCA poll.

Chip Hester is in his second season as the head coach of the Barton Bulldogs. He has a connection to Chowan, the alma mater of his parents (Class of 1968). His father, Larry, played for legendary Chowan head coach Jim Garrison.

Thursday’s game is billed as “Blue Out Community Night” at Garrison Stadium as spectators are encouraged to wear “Chowan Blue.”

Gates to the stadium will open one hour before kick-off. Admission is $11 for adults, $6 for visiting students, and free for children ages 5-and-under. Chowan University students, faculty and staff are admitted free with valid University ID.

Parking is free. Limited space is available around the stadium in the Camp Hall lot. Overflow game day parking is in the Hawks Athletic and Vincent Center lots, located across from the stadium on Union Street. RV parking is limited to the gravel lots by the Rose Family Tennis Courts.

Tailgating is made by reservation only @ longm@chowan.edu.

Concessions are available during the game.

For those unable to attend, the contest will be streamed via the Chowan Sports Network located on the gocuhawks.com website, free of charge for all viewers.