ALBERTSON – It isn’t how you start, but rather how you finish.

The Tri County Travel League HotShots played their second ever tournament in Albertson on the weekend of Aug. 20, participating in the “Get Your Top Gun Game On Super NIT.” 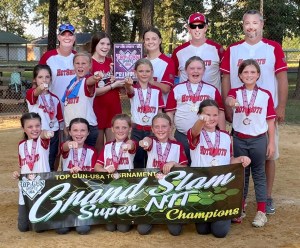 There were eight teams playing in the tournament. Each team played two pool games to determine their seed for the bracket games.

The HotShots got off to a rocky start in the first pool game against the OBX Pirates from Manteo, losing 12-3. The second pool game was against Lady Venom from Roanoke Rapids where the HotShots won 12-0.

The HotShots ended up placing as the 4th seed in the Gold Bracket. However, that put them having to play the OBX Pirates again because OBX was the #1 seed as determined by the pool games. The HotShots played an outstanding game, winning 13-11 in extra innings.

The HotShots got a break while the #2 seed Shockers and #3 seed Cleveland Angels played to determine who would advance to the championship game vs. the HotShots.

The championship game was played against the Shockers from Kinston. The HotShots were on fire, but kept fans on the edge of their seats and claimed the championship with a 12-9 victory.

Two of the HotShots received MVP recognition for their outstanding performance. In the first Gold Bracket game, Casey Piland was awarded MVP for her outstanding performance in fielding and hitting. Allyson Vaughan was awarded MVP during the Championship game for her astonishing plays, especially with fielding and stretching her body to make plays happen at first base. You can watch the girls answering questions during their interviews on the SE Top Gun Softball FaceBook page.