WINDSOR – Derrick Hardy knows first-hand of the struggles of being born and raised in an economically distressed environment.

Even though he was reared in a home where both his parents worked and made sure he had all the “comforts” of childhood, Hardy was keenly aware of the world around him in rural northeastern North Carolina. He knew that in order to succeed in life, a man must first take stock of himself and set goals accordingly. 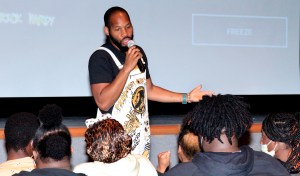 After leaving the stage of the Bertie High School auditorium, Free Derrick Hardy got up close to his young audience to share his message of hope and inspiration. Staff Photo by Cal Bryant

“In other words, you have to understand what you’re worth,” he stressed.

So, keying in on “worth”, Hardy has blended a successful work career as a success coach around an equally productive career in music as a rap artist whose song verses offer hope and inspiration. He shared those words with students at Bertie High School during a kick-off held for the summer school session.

As he stood on the stage of the BHS auditorium and surveyed his young audience, Hardy remembered his days at Bertie when the high school was located just across the road from the new facility. He graduated from Bertie in 2007, the same year as his cousin, current NBA player Kent Bazemore, who grew up in Kelford.

“We went to the old high school across the street,” Hardy reminisced. “I remember Mr. [Tony] Hoggard as Coach Hoggard back in those days.”

His visit in June was the first time he had set foot inside the new Bertie High School.

“This is a beautiful place; ya’ll are so blessed to have such a great environment to grow and learn,” Hardy noted. “There are schools in bigger cities that aren’t as nice as this.”

When his days at Bertie High were over, Hardy attended and graduated from East Carolina University, obtaining a degree in Social Work. He currently resides in Greensboro.

“Even though I left Bertie, my heart is still here. This is a special place,” he stressed, making sure to recognize that his grandmother, who lives in Kelford, was among those seated in the audience.

“It was while I was at ECU where I developed my passion for music,” Hardy said. “But I understood that becoming a music artist takes money. Unless you find instant fame as an artist, you’ve got to have some sort of income to use as an investment in music. That’s why my education is so important.”

“I was watching a video and someone dropped a penny in some sort of solution and it turned gold in color,” Hardy recalled. “We don’t put value in a penny because it’s not worth very much. I thought about where I grew up and how people may think we’re not very special or worth anything. But just like that penny, when you work hard and apply yourself, you grow in value. We can all be golden. We’re all valuable.”

Hardy asked his young audience did they know what they were worth?

“You have an infinite amount of worth, there’s no limit to your worth,” he said. “At this moment in time, here in school, you are adding value to your life. Every day you learn something adds to your life. You are constantly growing in value. The same can be said for your parents, your teachers, your principals….their value grows as they pass along their knowledge to you.”

Value is added, Hardy pointed out, through job skills.

“It doesn’t matter if you are a doctor, lawyer, mechanic, or whatever, there are people that need you because you excel in your job…that adds value to your life,” Hardy observed.

He stressed that value can also be added through honesty, loyalty and respect.

Hardy also pointed out that life can be rough on occasion.

“There will be rough spots, but they’re only temporary,” he remarked. “Rely on the advice of your parents, your best friends and your teachers to work your way through those spots.

“I’ve had my share of tough times, but I didn’t let life beat me down. That’s why I chose to change my name to Free Derrick Hardy. I’m free to become my best self,” he added.

On the flip side, Hardy warned the high school students of things that can detract value. He polled his audience for what they thought and received answers such as stress, and peer pressure.

“Drugs can take away value,” Hardy said. “The world of hip hop has lost a lot a artists due to drug overdoses. “Breaking the law, going to jail are also things that take away your value in life.

He then encouraged his audience to remember one simple, but powerful, phrase: discipline determines destiny.

“Write down the things you need to succeed in and follow through,” Hardy suggested. “Say you have a big test coming up. Discipline yourself to set aside time to study. Same thing in life….set a goal and use discipline to reach your destiny. Dreams become ideas that become reality.”

“Derrick’s album – Gold Pennies – is dedicated to the 252 (local area code), especially Bertie County,” Hoggard said. “The reoccurring theme of this album is knowing and understanding your personal worth, not in money, but in life itself.

“How many of you will see a penny on the ground and not even bother to stop and pick it up,” Hoggard asked. “But you need to understand that pennies make dollars. Don’t underestimate the value of a single penny.

Look inside and understand your worth. Until you realize that you are the person you need to be, we’ll keep encouraging you to get there,” Hoggard added.

Hardy’s music is adaptive to what so many individuals experience in a poor, rural environment…single mothers, often working more than one job, struggling to keep their family together while trying to build character within their children in an effort to allow them to have a better life than her.

The rapper also stressed the importance of religion, “in church on Sunday, that’s where we got our start,” he cites in a verse of a song.

In another verse, Hardy encourages his young audience to pay attention in school as that important part of their lives will open many doors as they become adults.

“You can do anything that you want to. Don’t get caught up in situations, stay in school and get that education. If you don’t then you’re working in your mama’s basement and that stuff you’re talking you’ll have to face it,” he rapped.

Each of the students attending the summer school kick-off event at Bertie High and at the middle school later the same day received a digital copy of his new album. He encouraged the students to listen to his music on his Instagram account: focusonbeingfree.