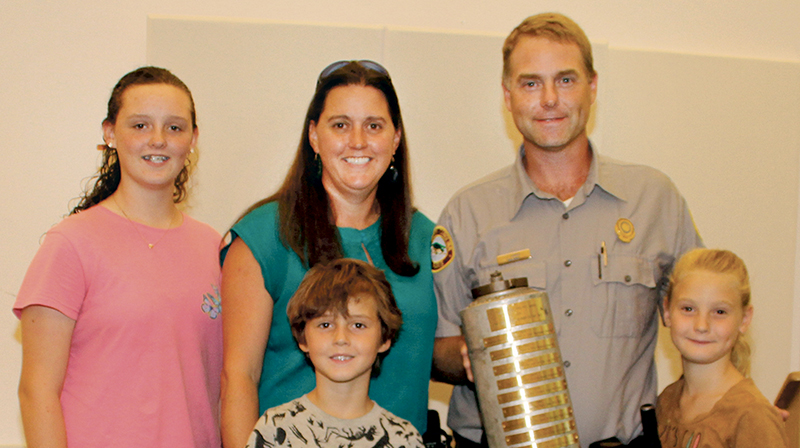 GATESVILLE – Merchants Millpond State Park is well-known and admired by the tens of thousands of annual visitors for its natural beauty.

But did you know that beauty is linked to fire?

For his efforts to further enhance the beauty of Merchants Millpond State Park, Ranger Jeffrey Turner is the 2022 recipient of the NC State Parks Burner of the Year Award.

The award, now in its ninth year, is in recognition for significant contributions in the implementation and promotion of prescribed fire as a natural resource management tool.

Katherine Capps, Deputy Director of Operations for the North Carolina Park System, made the presentation during a recent visit to Merchants Millpond. The award was formally presented at the annual meeting of the North Carolina Prescribed Fire Council held Aug. 10.

Over the past few years, Capps noted that Turner, in addition to his normal work schedule, has taken the responsibility of being the “Burn Boss” at Merchants Millpond State Park.

“You have working to bring the prescribed burning program back to the park,” Capps noted. “You collaborated with a number of other agencies, including the North Carolina Wildlife Resources Commission and the North Carolina Forest Service.

“You have been a strong advocate in getting other park staff trained and qualified to be on the fire lines,” Capps continued. “Over the past year, you have never missed the opportunity to burn when conditions were favorable. As a result we are getting to the point where we’re burning at the frequency needed here at the park and within areas that have never been burned since this property became a state park.”

Capps stressed that it was for all the reasons she mentioned, in addition to Turner’s leadership, that he was the recipient of the North Carolina State Parks Burner of the Year Award for 2022.

“We appreciate all of your hard work, your dedication, and your commitment here at Merchants Millpond State Park,” noted Capps as she handed the award to Turner.

“Thank-you; this is very much a surprise,” Turner humbly responded.

Turner has worked as a Ranger at Merchants Millpond State Park for 19 years.

“We’ve always had a prescribed burning program here,” Turner said, adding that he went through all the training to gain “burn boss” certification.

Turner said the first step in the process is to pre-determine the areas that need to be burned and in what priority.

“Everywhere needs burning, but there are places that haven’t been burned at all before,” he said. “Depending on the need, we schedule the burns.”

However, Mother Nature has the final “say-so” in that schedule.

“We burn when the weather allows us to,” Turner stressed. “A lot of factors go into making that final determination if it’s is or isn’t okay to burn.”

Turner explained why prescribed burning is so important.

“Wildlife value and aesthetics are the main two reasons we burn here at the park,” he said. “Visitors to the park enjoy walking along the trails and looking through the woods to spot wildlife. When we burn, we thin out all the underbrush, which allows our visitors a better view of the park.”

The prescribed burns also promotes the growth of natural grasses, which in turn leads to a wide variety of wildlife feasting on that vegetation.

Turner, a native of Eure, is the father of three children: Josie, Charlotte, and Levi, who were present, along with his wife, Sara, at the award presentation.

He is a graduate of NC State University with a degree in Wildlife Management and Resource and Environmental Science.

“I came home to be a park ranger and that’s what I’ve done for the past 19 years right here in my home county. It doesn’t get much better than that,” Turner concluded.