AHOSKIE – Andre Lassiter, a member of the Roanoke-Chowan Community College Board of Trustees, will receive the 2022 ACCT Southern Regional Trustee Leadership Award at its annual congress in New York City in late October. 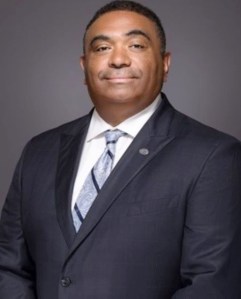 The Association of Community College Trustees (ACCT) annually recognizes the contributions of trustees who have exemplified outstanding leadership while serving on local community college boards.

“We are excited and proud to announce Andre Lassiter is the recipient of this year’s Southern Regional Trustee Leadership Award from the Association of Community College Trustees,” states Dr. Murray J. Williams, president of R-CCC. “Mr. Lassiter is deserving of this high honor because he has committed his life to serving his community. During his service to the college, he has been a catalyst for positive change and development. His footprint has promoted inclusive excellence and continues to make an impact on and off the college campus.”

Lassiter works collaboratively with legislators, county commissioners, and other community leaders in Hertford, Bertie, and Northampton counties to support the efforts of the community college to serve its students.

He currently serves as an elected official in Hertford County, serving as a county commissioner for the past four years. In addition, Lassiter also serves on several state and community boards, including the Roanoke-Chowan Community Health Center Board, the Ahoskie Housing Authority Board, the Roanoke-Chowan Community College’s Foundation Board, the North Carolina Department of Transportation Peanut Belt State Board, the Ahoskie Planning and Zoning Board, and the Hertford County Partners for Progress Board. He played an integral part in the establishment of Special Olympics in Hertford County.

“Mr. Lassiter’s commitment to serving on the Roanoke-Chowan Community College Board of Trustees for over a decade has been unparalleled. He has demonstrated outstanding leadership on the Board by serving as a mentor to new board members while simultaneously serving in a variety of leadership roles,” continued Dr. Williams.

His impact on the community college includes spearheading the renovation of the college’s auditorium, bathrooms upgraded for ADA compliance, infrastructure upgrades for a state-of-the-art HVAC system, roof replacements for all campus buildings, and a total renovation to the historical Davis building (the first building on the campus which originally housed the college’s administrative offices and classroom spaces). Lassiter also led the charge in raising funds and working with an architect on the new $8 million fine arts building planned for campus.

“Mr. Lassiter has been a driving force in ensuring that the college president and the board of trustees maintain an engaging working relationship,” states Ronald Gatling, who chairs the R-CCC Board of Trustees. “Mr. Lassiter is a passionate advocate for community colleges and is extremely proud of being a first-generation community college student and graduate. He has passed on the value of community college education to his family by encouraging them to enroll in the local community college. His wife, Kimberly, graduated from Roanoke-Chowan Community College as well as his son, Andre Jr., and his daughters, Andrea, and Moriah. Mr. Lassiter is the epitome of trustee leadership and is very deserving of this nomination.”

As a business owner, county commissioner, trustee, chair of the finance committee, Foundation Board of Directors Treasurer, Elder of Ahoskie Soul Saving Station Evangelistic Center, husband, and father, Lassiter has combined professional and personal passions to ‘go above and beyond in every role’.

“One example of his efforts is the Weld to Work program for underemployed residents,” explains Benson. “This program allows participants to attend a six-week boot-camp and gain high-demand industry recognized credentials that area employers are seeking. Mr. Lassiter went above and beyond the call to recruit and secure participants for the pilot class.”

For a man who is likely one of the busiest in the county, you would not know it to meet him! R-CCC leaders say that Lassiter always has time for students, coordinating mentoring opportunities, and being a positive influence on others.

“Mr. Lassiter is willing to give of his time and talents whenever duty calls. His sacrifice of time from his businesses and family demonstrates that the college holds a special place in his heart and that his commitment to helping others change their lives through education is clearly a worthy cause,” concluded President Williams.

For more information about enrolling at R-CCC, visit www.roanokechowan.edu or call the Office of Admissions at 252-862-1248.