HotShots get off to a sizzling start

BENSON – In their first-ever tournament, the HotShots won first place at a TopGun invitational tournament at VYAS Park in Benson, NC on Aug. 14.

The HotShots are a new 8U team with the Tri County Travel League. They were invited at the last minute to join an invitational tournament with Southeastern TopGun when a team backed out. 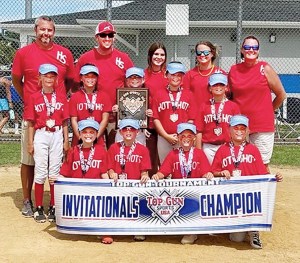 The journey could truly be the plot of a Disney movie. With the team being new and their first tournament originally not scheduled until the following weekend, they did not have their team uniforms. Head coach Michael Vaughan contacted the parents after receiving the invitation the day before the tournament. Surprisingly, enough players (parents) committed to make it possible. The head coach was told the team could still play in the tournament without matching uniforms, but how would the girls look and feel like a team without matching uniforms. Coach Tammy Piland offered to make the girls and coaches some matching shirts. “HotShots” was hand painted on the uniform shirts and numbers were ironed on the back for the players. The coaches had “HS” hand painted on the front of their shirts and coach on the back. Matching socks and belts fell into place with others pitching in to complete the uniform. Everyone was excited and yet nervous as they embarked on this new journey.

There were two other teams playing in the tournament, Lady Venom from Roanoke Rapids and Cleveland Angels from Garner. Two games were played in the Pool Play. HotShots beat Lady Venom in the first game 13-8, while losing to the Cleveland Angels 9-2 in the second consecutive game.

The HotShots beat Lady Venom, 5-2. They advanced to face Seed #1 (Cleveland Angels), marking the fourth consecutive game of the tournament for the HotShots, but they persevered, winning 17-5 to bring the Championship home. The first hit of the game, Kayla Mizelle leads off with a homerun. She received a medal for this hit.

The HotShots were awarded a Championship banner and plaque. All girls were awarded with a medal and TopGun visor. The banner will be displayed at the John Asa Drew, Jr. Field of Dreams in Aulander, where the HotShots practice.

The HotShots were scheduled to play in their second tournament on Aug. 20 at Albertson Recreation Center in Albertson, NC.