UNION – A veteran local firefighter has been selected to serve in a leadership role the regional level. 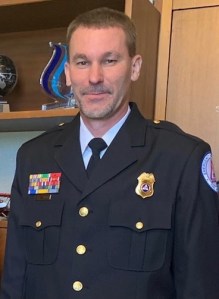 At their quarterly business meeting last month, the Eastern Carolina Firefighters Association named Chris Smith as their President. Smith is the Chief of the Union Rural Fire Department.

This marks the first time a Hertford County firefighter has been selected as president of the Eastern Carolina Firefighters Association since it was established in 1934.

Smith said there are three regional fire associations (Eastern, Piedmont, Western) that allow for information sharing and representation at the local level.

Smith joined the joined the Eastern Carolina Firefighters Association Board of Directors in 2010.

“I did that because I wanted to bring a voice to our regional association about the many different issues and faucets faced in the fire service of our local area,” Smith noted.

The Associations’ mission is to support each member by providing education, information and representation for the fire service of Eastern North Carolina.

“We do that by promoting informed and progressive leadership through professionalism, dedication and integrity,” Smith said. “We also foster a professional and personal relationship among our membership, and strive to assist the return of our personnel safely to their families.”

The Eastern Carolina Firefighters Association, which covers 37 counties, awards annual scholarships, sponsors and hosts continuing education and schools, recognizes firefighters with awards and supports its membership in many other ways.

“I had the privilege to give Chief Jason Howell of Como Fire Department the Fire Chief of the Year award for the East in 2020,” Smith recalled.

Smith is marking his 30th year with the Union Rural Fire Department, joining in 1992. He worked with the North Carolina Forest Service as Assistant County Ranger in Hertford County from 1996-2010. Smith is currently Hertford County’s Emergency Management Director and Fire Marshal.

“With serving 30 years in the fire service in some way shape or form, it is and has been a great honor for me to be able to serve such dedicated group of firefighters and be there voice in the East at this level,” Smith concluded.