EURE – Deputies with the Gates County Sheriff’s Office apprehended a fugitive on the run out of the state of Virginia on Wednesday afternoon.

According to Gates County Sheriff Ray Campbell, at approximately 5:10 p.m. Gates County Communications received information that officers with the Suffolk (Virginia) Police Department were in pursuit of a wanted suspect that was heading towards Gates County. 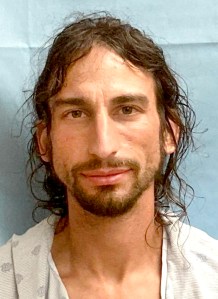 After pursuing the suspect for approximately 10 miles at speeds in excess of 80 mph, deputies were able to successfully stop and apprehend Krys A. Karyshyn of Chesterfield, Virginia.

At this time, Karyshyn is in custody in North Carolina and being held on a Fugitive Warrant.

Additional felony and misdemeanor charges are pending in North Carolina.

In a press release, Suffolk Police spokesperson Jennifer Moore said that at approximately 4:52 p.m. on Wednesday, Suffolk Police Dispatch received a call at the 1100 block of Carolina Road regarding a reported reckless driver who had been acting suspiciously. Officers located the suspect on Whaleyville Blvd and conducted a traffic stop and the suspect driver appeared impaired.

Before further investigation could be completed, the vehicle sped off in an attempt to elude officers, Moore said. Officers continued to pursue the suspect vehicle on Whaleyville Blvd. During the pursuit the suspect vehicle collided with a Suffolk police vehicle and fled. No injuries occurred in Suffolk as a result of this incident.

Eventually, the suspect vehicle fled into Gates County, NC and Suffolk Police units discontinued their pursuit. The Gates County Sherriff’s Office later advised that they had taken the suspect / owner of the vehicle into custody.