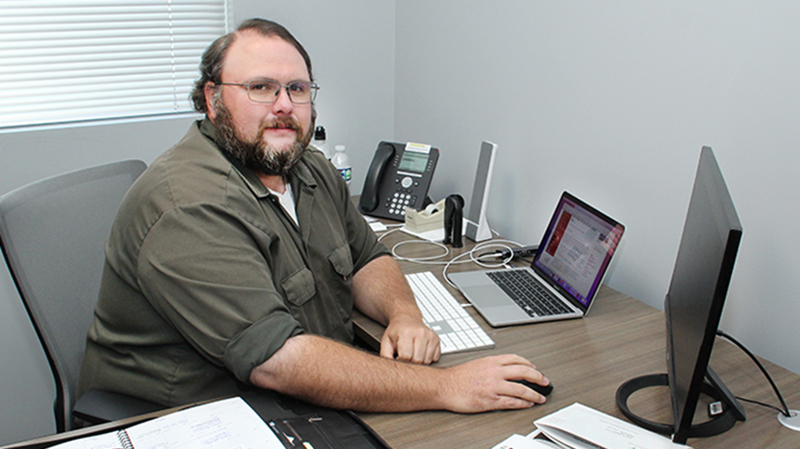 WINDSOR – Despite living in the fast lane in Raleigh, Edward Godfrey says he’s happy to enjoy a slower pace in his native Coastal Plain of North Carolina.

Godfrey, a native of Currituck County, is the latest addition to the staff at the Bertie County office of NC Cooperative Extension. He arrived July 1 as the Field Crops Agent and Consumer and Commercial Horticulture Agent, joining a team that includes Extension Director Billy Barrow, Kathy Copeland (4-H Youth Development) and Elizabeth Baker (Family and Consumer Sciences).

“I’m happy to be here and help the local folks. My door is always open,” Godfrey said. “It’s a good move for me. I’m closer to home and closer to family.”

After graduating from NC State University with Bachelor of Science (2010) and Masters degrees (2012) in Biological and Agricultural Engineering, Godfrey remained in Raleigh, working full-time as a research associate in the Department of Biological and Agricultural Engineering. He remained in that position until 2020. From February 2020 until June of this year, Godfrey served as a research associate in plant microbiology within the same department.

“In my previous position it was primarily all research, primarily in crop production, bio energy crops, and harvest mechanization,” Godfrey said. “As a part of that larger research I did have some Cooperative Extension activities at the same time. I would talk to growers and industry stakeholders. The preparation, as far as my education goes and the work I did at NC State that led me to this position, allowed me to enjoy engaging with growers. I really enjoy getting out there in the community and talking to people about their problems and trying to help them solve their issues.”

Godfrey, age 36, grew up on his family’s farm near Moyock. His father and brother still tend to that land where they grow corn, soybeans and wheat.

“Some of my very first memories is doing stuff on the farm with my dad,” he said. “Being around farm machinery and farming is what led me to ag engineering. That led me to research and understanding that side of the business, and now I’m back where I feel the most comfortable: eastern North Carolina. This is a natural fit for me.”

The 2005 graduate of Currituck County High School said he learned very early that all farmers have a desire to see rain at just the right times and no major storms during the critical part of the growing and harvest periods.

“But I have no control over either,” he said with a grin. “No one can control Mother Nature.”

After a dry May and June, which prompted concern about the possibility of low yields at harvest, Godfrey said the agricultural outlook in Bertie County is much brighter.

“Right now, the good rains we’ve had recently, and I call them million dollar rains, have put a smile back on the faces of our farmers in the county,” he noted. “I’m still getting acclimated with the county, but from what I’m hearing, everything is good and we’re hoping to finish out the year on a positive note.”

He added that soybeans and cotton are the top two crops grown in Bertie County.

On the Consumer and Commercial Horticulture side of his new job, Godfrey said an effort is underway to get the county’s Master Gardeners program restarted.

“We have good master gardeners already here, but we need to get those classes back up and running to add to the numbers. We would love to have younger people to get involved,” he said.

Those wishing to learn more about those classes or for Bertie farmers who have issues with their crops, Godfrey said to feel free to contact him at 252-794-5317 or stop by the Extension Office located at 104 Lancaster Avenue, Windsor.