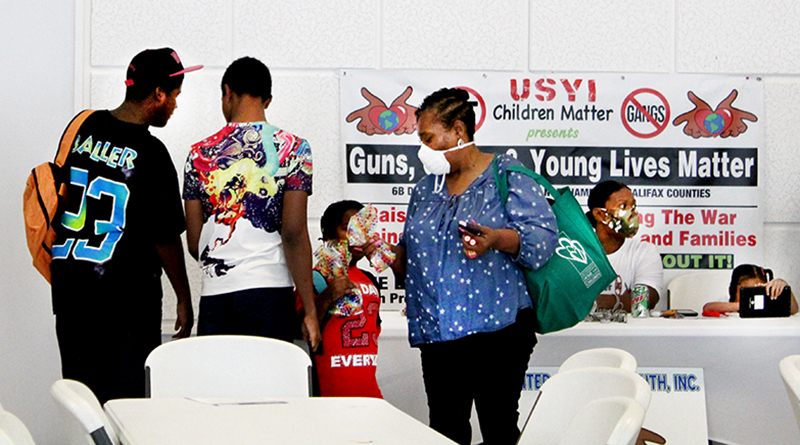 The Northampton County Cultural and Wellness Center was busy on July 30 as it hosted an event to raise awareness to the threat of gun violence, locally, across the state, and nationwide. Staff Photo by Holly Taylor

Those were some of Marcia Watford’s opening words at the “Guns, Gangs, and Young Lives Matter” event held at the Wellness Center in Jackson on July 30.

Watford, who organized the event with United Services Youth, Inc, emphasized that the community needs to come together to address the gun violence problem. It’s not just something that people can discuss quietly within their homes. Instead, it’s an issue that can affect anyone at any time.

“We want to do prevention,” Watford said. 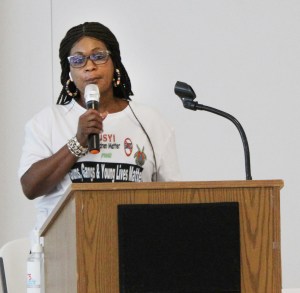 The auditorium of the Wellness Center on Saturday was packed full of children and adults, interested in learning more about what they can do. Some attendees came from local counties – including Northampton, Bertie, Hertford, and Halifax – while others traveled from as far away as Nash, Edgecombe, and Pitt counties.

The first speaker during the event was Derrick Capehart, a Bertie County native whose life was forever changed last year by a gunshot wound.

Capehart explained that he was inside a relative’s house when a drive-by shooting happened. A bullet came through the wall and struck him. With the caliber of weapon fired, Capehart said that he probably would have died if he’d been struck outside. He was quickly airlifted to the hospital and had to go through a seven-hour surgery to save his life. Afterwards, he spent some time in the hospital and then a nursing home for months as he recuperated.

“I haven’t walked on my own since,” he said, gesturing to the walker he used to reach the podium.

Capehart admitted that he wanted to give up while he was stuck in the hospital, unable to get back to work and his everyday life. But he credited support and prayer from his family to help get him through.

“You don’t have to be in no gang,” Capehart said, addressing the young people against the dangers of peer pressure. “Be the leader. Put down the guns.”

Sonynia Leonard, who serves as the Chief Juvenile Court Counselor for the 6B Judicial District, spoke about the juvenile justice system. She also offered a message of encouragement to the children, and reminded them that a split-second decision can change their lives.

She shared a story about a high schooler with a good grades and also athletic success. That student got into an argument and ended up violently stabbing another person in anger. Now he’s in juvenile detention and awaiting trial.

“The decisions you make can change your life,” she said. “You can make a decision in anger and it change the course of your life forever.”

To the adults in the room, Leonard urged them to be positive mentors to the children around them.

“We don’t have bad kids,” Leonard continued. “You have kids that make bad choices and bad decisions. And it’s up to us to help them get back on track.”

Bertie County Sheriff-Elect Tyrone Ruffin offered a message of encouragement during his remarks.

“No matter what your background is. No matter where you come from. No matter what you’ve done. All of us can be great,” Ruffin said, and then added for the adults, “This is not a time to give up on our youth. We must encourage them instead of discouraging them. Even if they don’t listen, we must continue to plant those seeds as somebody did for us.”

Other speakers during the event included Michael Pittman from Operation Restart, who spoke about positivity and self-esteem, and Kenneth Cates from Tarheel Challenge, who talked about giving kids a second chance.

But perhaps the words with the biggest impact came from Watford herself during the event. She shared a story about a mother with four boys. Three grew up to be successful in different ways, while one joined a gang and is now in prison for life.

Watford explained that the four boys all grew up under the same roof together with the same parents, but in the end, they all took different paths, and the one who joined the gang is no less important to his mother than the other children.

Watford continued the story, sharing the moment when gunfire tore through the mother’s home. After that, the mother became the “hot topic” everyone wanted to talk about as they speculated about the shooting and questioned her integrity. But Watford emphasized that gun violence affects more than just the people who live a “certain kind of lifestyle.” Bystanders can get caught in the crossfire too.

Every time someone uses a gun, two families are affected and two lives are impacted, Watford said.

At the end of her remarks, Watford revealed that she is the mother in the story. But instead of giving up, she decided to work to bring the community together to stop gun violence. She didn’t want others to go through the same thing she did.

“None of this has a color. It’s not just Black or white. It affects us all together,” Watford told the News Herald after the event.

She said her group plans to continue to host future events to engage the community on the topic.

“We can no longer sit in our own homes and talk about it. We have to stand up. It’s no longer a private conversation,” she said. “And maybe you’re just a parent or a youth. You don’t hold a title or you’re not working for law enforcement or a program. That doesn’t mean your voice doesn’t count. It does count.”