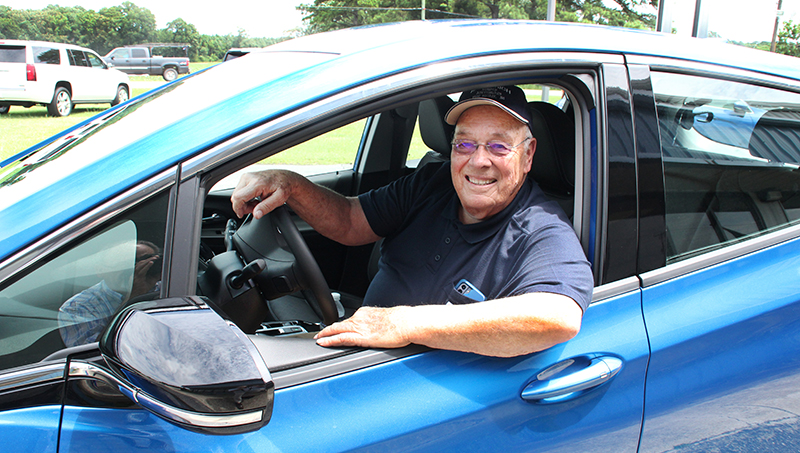 Harold Miller of Jackson prepares to drive off the lot at Strickland Auto Group of Ahoskie in his newly purchased 2022 Chevrolet Bolt EV. Miller has long been a proponent of electric vehicles, dating back to the 1990s when he headed up the famed EV program at Northampton County High School-East. Staff Photo by Cal Bryant

The former high school auto mechanics teacher who has driven and repaired gas-powered vehicles since his teenage years can now been seen on the highways and back roads of the Roanoke-Chowan area – and beyond – behind the wheel of an electric vehicle (EV). That fact shouldn’t come as a big surprise as, after all, he was among the movers and the shakers behind the nationally acclaimed EV program nearly 30 years ago at the now closed Northampton County High School-East. 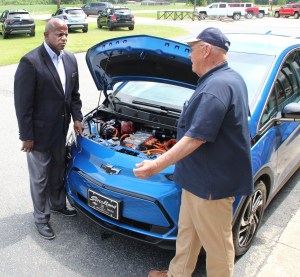 As a veteran mechanic, Harold Miller (right) explains the inner-workings of the electric-powered vehicle to Marshall Cherry, President and CEO of Roanoke Electric Cooperative. Miller used grant funds from the local co-op to purchase the vehicle. Staff Photo by Cal Bryant

That program was the subject of a 2004 book – Electric Dreams, written by Caroline Kettlewell, which tells the story of a team of high school students from a poor school district in North Carolina competing with other more affluent schools to build and race an electric car.

Two weeks ago, Miller purchased a 2022 Chevrolet Bolt EV from Strickland Auto Group of Ahoskie. The car produces 200 horsepower from its batteries and is also “peppy” (0-60 mph in just 6.5 seconds). It can travel up to 259 miles when fully charged.

Miller was assisted in the purchase of the EV thanks to Roanoke Electric Cooperative (REC). Using funds from a grant from the Mary Reynolds Babcock Foundation, REC’s EV Pilot Program offers prospective electric vehicle owners up to $5,000 towards purchasing an EV (see story, page 1A).

Miller thanked REC for being at the forefront of promoting the use of electric vehicles through their EV Pilot Program.

“They helped me buy this and even let me know where I could find one,” he noted.

Billy Little, Finance Manager at Strickland Auto Group, said the dealership is experiencing an increase in the number of calls inquiring about the availability of electric vehicles.

Miller said the operating range of an electric vehicle like his is far more than he expected.

“I have a friend in Gates County who drove to Sanford (NC), recharged there, and returned home,” he stated. “That’s roughly 200 miles there and 200 miles back. And when he recharged it in Sanford there was still 30 percent of the original charge remaining.

“I’ve also been in one that went from Jackson to Raleigh on the hottest day of the year with the air conditioner wide open and running 80 mph on the interstate with no problem whatsoever,” Miller added.

“One of the first community programs that I led when I first came to Roanoke Electric in the early 1990s was a partnership with Harold Miller and his EV program at Northampton-East. I started there in 1993 and Mr. Miller came in looking for local sponsorship,” Cherry shared.

“Harold Miller is a man who was ahead of his time…teaching his kids in high school about how electric vehicles were clean energy alternatives to those that burn fossil fuel. And look at where we are today….the United States has finally caught up with Harold Miller’s vision,” Cherry added. 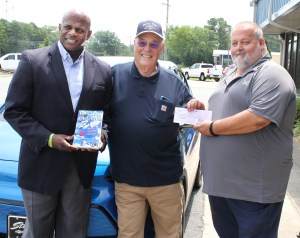 Miller was quick to point out that while it appears his vision has come full circle, he is concerned about the lack of charging stations for electric vehicles.

“There are plug-in charging stations out there, but if you take the number of electric cars out on the road today, and that number will grow dramatically, those with electric vehicles will be forced to wait in line for a recharge,” Miller stressed.

He also suggested a way of having an electrical charging grid built into the road.

“That technology is already being tested up in Detroit, Michigan,” he said.

Cherry said the next big project for REC is to increase the number of EV charging stations within the co-op’s service territory.

Born in Mount Airy, NC, Miller’s family moved to Norfolk, VA when he was a child. As a teen, he began to learn the trade of auto mechanics while working at his father’s service station. He later worked at Kline Chevrolet and taught mechanical engineering classes at Chesapeake (Virginia) Community College.

In 1969, Miller was offered and accepted the job of starting up the automotive mechanics class at what was then Northampton County High School, located near Creeksville.

“I found my true love in teaching at the high school,” Miller said, looking back on an educational career that spanned 30 years.

What became the EV program at Northampton-East began in the early 1990s.

“That was the first time I’d ever worked on anything electric. It started with a golf cart. Just started tinkering around with a few ideas,” Miller recalled.

In 1993, John Parker, then the county’s Assistant Superintendent of Schools, asked Miller if he could build an electric car.

That set the stage for what evolved into the NEAT (North East Automotive Team) program, one that involved the physics and science departments at four local schools (Weldon High School, Northwest Halifax, NCHS-East and NCHS-West) along with the automotive classes.

“We were very fortunate at that time to have Eric Ryan, a California – Berkeley graduate who came to Northampton County through the Teach for America program,” Miller said. “He was a science and physics teacher who was young and energetic….the kids loved him. He was their pied piper and they followed his lead.”

Miller credits Parker for being the visionary of the EV program.

“John said if we put them together – the academics and vocation subjects – then that what education is all about,” Miller stressed. “My role was to build the car and give advice on what to do.”

The original car – nicknamed “Shocker” – was the shell of a Ford Escort. The NEAT squad, meeting after the regular school day had ended, slowly transformed it into an electric powered vehicle.

“We definitely didn’t have the best-looking car there, but our team possessed an unfaltering dedication to perform at the highest level and that’s exactly what they did,” Miller recalled of the 1994 event.

NEAT rolled into Richmond and left with the overall championship. In the different categories of the Grand Prix, NEAT claimed first place in the range event and the race, and placed third in their educational presentation.

The little school from a farming community had literally “shocked” the EV world. Their victory at the EV Grand Prix led to published stories in national publications as well as Kettlewell’s book a few years later.

Now, despite the passage of nearly 30 years, Miller says he always felt that electric vehicles were the wave of the future.

“I just didn’t think it would evolve this slowly,” he said. “I knew it would come for two reasons…one, to lower pollution levels that helps our environment, and two, gas cars are very inefficient. When you burn a gallon of gas, 82 percent is wasted…it goes out the exhaust pipe. With an electric car, 99 percent of what goes in powers that vehicle. It’s so much cleaner and so much more efficient.”

“We can make electricity in many different ways; we can’t make fossil fuel,” Miller concluded just before climbing back inside his new car and quietly traveling back home to Jackson.