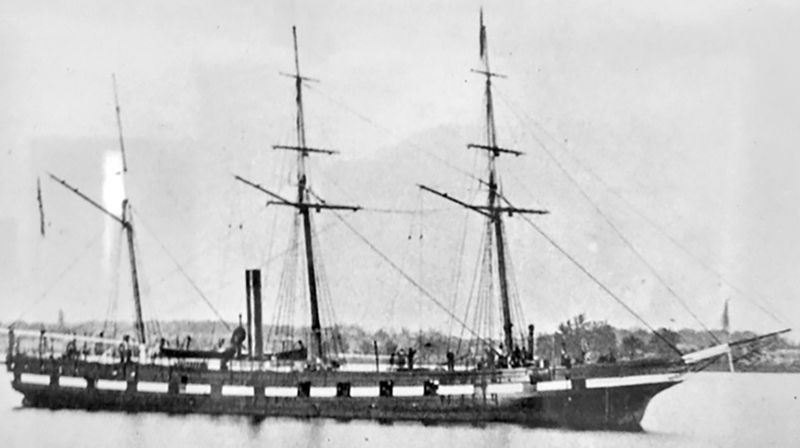 In 1857, the “Southern Star” was the largest ship ever built in North Carolina. It later served as a Navy cruiser that patrolled the seas off the West Indies in search of vessels employed in the illegal slave trade.

MURFREESBORO – As the Murfreesboro Town Council discusses the possibility of having a mural painted of the Southern Star, perhaps it’s fitting to read about the past history of this ship, the largest ever built in North Carolina at that time.

The logo of the Murfreesboro Historical Association is the black outline of a rigged sailing ship with a smoking funnel. This design represents the Southern Star.

The ship had been the brainchild of Jesse Andrew Jackson, a local entrepreneur who had the vision of a building a packet that would operate directly between Murfreesboro and New York.

The launch date was set for April 16, 1857. The roads into town were crowded with spectators who expected to see the event of decades. By 11 o’clock, some 4,000 spectators were assembled on the banks of the Meherrin River. There were speeches. Then came the moment of the christening.

Mrs. Jethro Darden of Buckhorn wrote in her diary: “A goodly number of gentlemen went on board, and as it moved off every one seemed to be huzzaing in a gay and lively tone, and just as the bottle was raised to be broken to sprinkle and name the boat, the underworks gave way…”

With a resounding thud, the ship crashed into the Meherrin’s muddy bank.

Jesse Andrew Jackson came to Hertford County shortly before 1850 from Mahasquan, NJ. Murfreesboro attorney John Wheeler Moore described him as an “adventurous and visionary man”. He opened a store at Parker’s Landing on the Meherrin. Then he established a sawmill across the river from town. Next he added a brick kiln. This coincided with the establishment of two female academies in Murfreesboro – one for Baptists and another for Methodists. Jackson’s fortune was made. By 1855 he had sufficient capital to implement his next big idea…building a steamboat.

In October, the wealthiest farmers and merchants of the region gathered in Murfreesboro to draft a charter for the proposed company. They pointed out that the commerce of northeastern North Carolina had been hampered for decades by shoals in Ocracoke Inlet, the sole outlet to the sea. The introduction of steam-propelled boats had given the group new hope. It was felt that a “boat of this class can be successfully and profitably maintained between this place and New York”.

Under the terms of the charter, the Murfreesboro group pledged $25,000 and the creation of a joint stock company to build the shallow-draft steamship. The principal backers were a who’s who of local entrepreneurs: Murfreesboro merchants John W. Southall, John G. Wilson, B.A. Capehart, riverboat captain Hiram Freeman, Winton ship owner John Andrew Anderson, legislators Kenneth Rayner and John Parker Jordan, and Thomas and Henry Gatling, older brothers of the inventor Richard Jordan Gatling. A substantial portion of the stock was subscribed by the New York commission house of Glines and Graham, who were assumed to take over the operations of the northern end of the steam line.

Events moved quickly. Meeting at Winton on February 14, 1856 the group chose a board of directors and named themselves “The North Carolina and New York Steamboat Company. Jackson was authorized to proceed immediately to procure labor and materials for the project along with plans and specifications for the ship. Within a month, Jackson had also acquired specifications for two engines from Betts, Pusey and Company in Wilmington, Delaware. Shipwright John A. Kirkman of New York was retained to supervise the construction of the vessel. The board moved to apply for an act of incorporation from the North Carolina General Assembly in March.

Then disaster struck. Without warning, the firm of Glines and Graham went into bankruptcy in the fall of 1856. They had paid only $400 on their stock subscription of $8,000. This was a serious blow to the financial viability of the project. President John G. Wilson withdrew his involvement, and other investors became restless.

Somehow, Jackson soldiered on. Dr. S.J. Wheeler wrote to the Petersburg paper “Daily Express” that Jackson had “waded through difficulties in the accomplishment of this work, that would have deterred many a man of less nerve”. However, the steamboat company collapsed in a matter of weeks. John Wheeler Moore wrote that “the North Carolina stockholders, fearful that their investments would end in loss, stopped their advancements. Poor Jesse Jackson got into a sea of troubles. Suits and demands thickened upon him.” The ship was auctioned off in the sheriff’s sale in October.

The Southern Star was purchased by John W. Southall of Murfreesboro and Captain Thomas W. Badger of the Eastern Shore of Virginia. Badger had recently been lauded nationally for his gallant behavior in the sinking of the streamship Central America. Late in the year Southall and Badger towed the ship to Wilmington, Delaware for the installation of the engines. In the summer of 1858, the Southern Star made her maiden voyage to Norfolk for caulking, painting and finishing touches. The new ship had a displacement of 545 tons. She measured 169 feet in length, 28 feet in beam with a draft of 12 feet, 6 inches. With steam engines and screw propeller, the Southern Star was capable of speeds of up to eight knots.

In late 1858, the USS Water Witch was fired upon by shore batteries while surveying a channel on the coast of Paraguay. The ship’s helmsman was killed. When diplomatic negotiations failed to obtain redress for the American government, President James Buchanan moved to send a naval squadron to obtain satisfaction. In September, 1858 it was announced that the Southern Star had been chartered by the government for this expedition. She was sent quickly to the Norfolk Navy Yard and converted to a cruiser by the installation of twelve- and thirty-two pounder cannons. The ship performed so well in her initial sailing that the government purchased her for $49,000 and renamed her the “Crusader”. This was the beginning of the most illustrious phase of her career.

On June 11, 1859, a brilliant young naval officer Lieutenant John Newland Maffitt assumed command of the Crusader. Towards the end of the year, the Crusader was sent to the West Indies to patrol for vessels employed in the illegal slave trade. It was a thankless task requiring Maffitt to pursue and investigate almost every ship sailing in the heavily-traveled West Indies route.

A reporter from the New York “Herald” was aboard in May, 1860 when everything changed. After investigating 60 ships and finding nothing, the Crusader spied a flagless square-rigger on May 23. Boarding the ship, Maffitt realized immediately he was on a slaver from the terrible stench. The French master refused to cooperate or provide any documents. An examination of the holds revealed 450 captives who had been seized from the African coast. Maffitt took his prize in tow and streamed into Key West. There the excited correspondent telegraphed a dramatic account of the capture to New York. The country was electrified.

Southern states were starting to secede in January, 1861 when Maffitt took his ship into Mobile, Alabama to cash a check for prize money “drawn, as was customary, on the Collector of the Port and payable to the officers and crew of the warship”. Mobile was in a frenzy of secession fever.

Reports circulated that the ship was “armed to the teeth” and had been sent to subdue the port. Payment of the prize check was refused. When told that parties were planning to seize the Crusader by force, Maffitt replied coolly that he would “shoot the first man that touches her”. Tensions calmed sufficiently to allow the cashing of the prize check. Maffitt was happy to weigh anchor and leave Mobile behind him.

In February, he sailed the ship to New York. Expecting North Carolina’s secession, Maffitt turned over the ship at the Greenpoint Navy Yard and resigned his commission. Over the next four years, he would distinguish himself as one of the most brilliant blockade-runners in the Confederate Navy.

Lieutenant T. Augustus Craven, an old friend of Maffitt’s, assumed command of the Crusader. He was soon ordered to the North Carolina coast to enforce the blockade. It was a cruel irony that the ship that Jesse Jackson had intended to enhance the region’s economy was the tool for choking its ability to survive or contribute to the Southern cause.

The original promoters languished in Murfreesboro. John Wheeler Moore wrote that “Jesse Jackson never recovered from this blow received in his great disappointment”. His eighteen-year-old son Edgar was killed at Chancellorsville in May, 1863. Moore wrote “Fresh disasters came upon him and after years of unavailing struggle, at the end of the …..war he left our country to seek his bread in other quarters. He had not taken fortune at its flood and in disaster alas found too few to do him reverence.”

The Crusader ended her service June 12, 1865 at Washington Navy Yard when she was taken out of commission. Six weeks later, she was sold at auction to T.P. Morgan for $9,000. Renamed the Kalorma, she returned to commercial service. Around 1875 she ship was sold to a firm on the West Coast and successfully undertook the voyage around Cape Horn. The Kalorama burned and sank near San Francisco on March 30, 1877.

After the passing of 164 years, the town of Murfreesboro is taking steps to memorialize this remarkable story. As part of a beautification project, two murals have been approved to be placed adjacent to Main Street. One will feature the Southern Star. The vision behind its creation endures today as citizens of the ‘Boro still search for a comfortable way to travel to New York.

Jimmy Moore serves as the President of the Murfreesboro Historical Association.