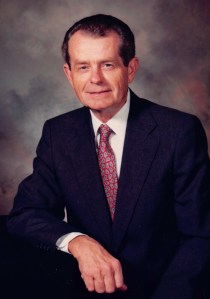 Born in Chowan County, NC on October 4, 1931, Percy was the son of Ned Wood and Roxie Harrell Bunch. The family moved to Hertford County when he was six years old. He graduated from Murfreesboro High School in 1950 and was enlisted in the US Army in 1955 and served in France. Percy married Lynette Mitchell from Aulander in 1956 and the two enjoyed 66 years together. He was very proud of his wife and children and encouraged them to help in his businesses. He was proud also to have a son, Michael, who took over to own and run the businesses he started. Michael followed the footsteps of his father and involved his wife, Vanessa, and their own two sons. Percy’s pride also included his two daughters Fran and Julie and their families.

Percy loved life and lived it to the fullest! He was well-liked and made friends all across the country. He loved to work, to start businesses and run them. Best known as “the watermelon man,” he also was a “peanut man,” buying peanuts for Birdsong Peanuts for 39 years. He operated his wholesale watermelon business out of Washington, DC for ten years. From that connection, he was elected as President to the National Watermelon Association where he served in leadership positions for six years. During that time, he was instrumental in founding the NC Watermelon Association, serving several terms as President.

It was evident that Percy loved the land and loved to see crops grow and flourish. He would often enhance the land that he was fortunate to own by creating green spaces, ponds and parks. This included his pride in his home and yard where he actually was cutting grass up to three weeks before his death. Those who knew Percy were aware that he was an avid collector. He traveled far and wide collecting tractors, antique cars, and museum pieces. He always displayed his collections in a museum setting along with mannequins to share with others.

Percy loved Murfreesboro. He wanted to make it a nicer place to live. He was proud of the Veterans Memorial at the Municipal Building, the establishment of Murfrees’ Landing Park at the Meherrin River, and the placement of the memorial marker there. Percy was especially proud to be a founder of the NC Watermelon Festival in Murfreesboro in 1986.

Percy loved his Sunday School class at Murfreesboro Baptist Church where he was a member for 60 years. He served in many ways, including as Deacon.

Besides his parents, Percy was predeceased by his brothers, Willis, Ervin, and Ray Bunch.

The family will receive friends on Friday, July 22, 2022, from 7-8:30 p.m. at Garrett-Sykes Memorial Chapel, Murfreesboro, NC, and other times at the home.

A celebration of life service will be held on Saturday, July 23, 2022, at 11 a.m., at Murfreesboro Baptist Church, with Rev. Lane Bass officiating. Burial will follow at Riverside Cemetery, Murfreesboro.

Memorial contributions may be made directly to Murfreesboro Baptist Church, 200 W. Main St., Murfreesboro, NC, 27855; or you may donate online by visiting www.tmcfunding.com/search; type Percy Bunch.

Garrett-Sykes Memorial Chapel is handling the arrangements for the Bunch family and online condolences can be directed to the family by visiting www.garrettsykesfs.com.