WINTON – An arrest has been made in a double murder that occurred in September of 2016.

Hertford County Sheriff Dexter Hayes said that Lakita Monee Odom, age 33, stands charged with the deaths of 59-year-old James Beale and 34-year-old Michael Scott Lassiter who were shot and killed on Sept. 1, 2016 inside a home they shared in Woodridge Mobile Home Park. 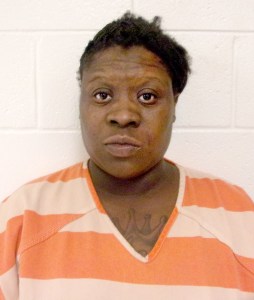 Odom, who was residing in Phenix City, Alabama at the time of her arrest on July 12, lived previously in Northampton County. She is now held without the privilege of bond in the Hertford County Detention Center on two counts of first degree murder, and one count each of conspiracy to commit robbery and burglary.

Hayes told the Roanoke-Chowan News-Herald that Odom was an acquaintance of Lassiter. He added that robbing the men of money was the motive behind the murders.

Shortly after the murders, Odom moved to Georgia and then later to Alabama, according to Hayes.

“This case took several agencies working together to reach this point we are now with a suspect being charged,” Hayes stated. “To the family of the victims, I hope this arrest will help bring some form of closure, to know that someone will be held responsible for taking the lives of Michael Lassiter and James Beale.”

Hayes said that after the effort of building a case against Odom, she was located in Phenix City, Alabama.

“My investigators contacted the Phenix City Police Department and informed them that our suspect was living in their city and that we needed assistance from their agency with the arrest of Ms. Odom,” Hayes said. “Once Ms. Odom was taken in custody, [HCSO] Lieutenant Chase Oliver and [HCSO] Investigator William Lassiter went to Phenix City, Alabama to interview Ms. Odom and to transport her back to Hertford County Detention Center.”

Hayes thanked the North Carolina SBI Criminal Apprehension Team and the Phenix City Police Department, as well as Oliver, Lassiter, [HCSO] Investigator Clifton Whitby, Detective Thomas Helms of the Ahoskie Police Department, and the District Attorney’s Office for their assistance in this case and the arrest.

According to a story published by this newspaper in early September of 2016, a neighbor of Beale and Lassiter reported hearing what sounded like a scuffle outside and then heard gunshots. That individual called 9-1-1 at around 2:11 a.m. on the morning of Sept. 1.

Upon the arrival of HCSO deputies, assisted by officers with the Murfreesboro Police Department, the two victims were discovered deceased inside the singlewide mobile home.

Additionally, there was a vehicle parked in the yard of the residence with its engine idling. Both the driver’s side and passenger’s side windows were fully lowered and there was music playing from the vehicle, either a radio or CD player.

It was later learned that the vehicle was not registered to either victim, but was used on occasion by Lassiter.