AHOSKIE – She may possess a soft voice, but when Jamie N. Burns spoke, people listened. 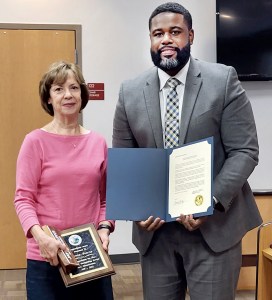 Jamie N. Burns (left) was recognized for her work as a member of the Ahoskie Town Council over the course of her four-plus year term. She was presented several accolades, to include a resolution of appreciation as shown being presented by Mayor Weyling White. Contributed Photo

Burns was honored here last week as an outgoing member of the Ahoskie Town Council. She served as a member of the Council from Dec. 12, 2017 until the end of her term in May of this year.

The resolution of appreciation, read by Mayor Weyling White, noted her “outstanding commitment to the town and the community” and recognized her “integrity, professionalism, and work ethic.”

“She has served with diligence and with the best interest for all citizens of the Town of Ahoskie for the duration of her term,” the resolution further stated. “During her tenure as Councilwoman, Jamie N. Burns’ high standards for professionalism in decision-making, work performance, interpersonal skills and the promotion of achievement for all those around her have strengthened to Town of Ahoskie immeasurably.”

The resolution was adopted unanimously by the Town Council and then presented to Burns along with a plaque of appreciation.

“What an honor and privilege it has been to serve on this Town Council,” Burns stated. “Many great accomplishments have occurred over the last four-plus years….renovation of the [town] gym, the opening of the Youth Center, paving First Street, paying down some of our debt, hiring and keeping really great employees, upgrading the police vehicles, adding police officers, upgrading the rating of our fire department – which helps with homeowners insurance, the departments helping out with recreation, and the decision to approve the helipad at the hospital, while controversial, was a good decision.”

Burns said council members spend a countless number of hours to ensure that the town’s citizens receive the best services.

“We try to meet every need within reason,” Burns stated. “I hope the town can move forward with downtown revitalization. I love this town and its citizens.”