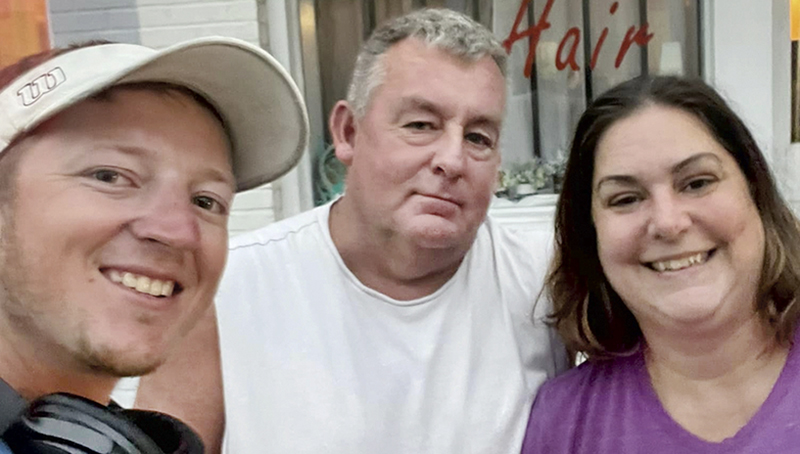 As he passed through the Roanoke-Chowan area during his walk across the USA, Isaiah Shields (left) was befriended by Dennis Dunlow and Margie Penwell during his stop in Aulander. Photo by Isaiah Shields

Walking is popular among all ages, whether for exercise, medical rehabilitation as ordered by a physician, or simply as a way just to get out of the house and enjoy the great outdoors.

But imagine quitting your job and dedicating over a year of your life to using your two feet to travel across the United States. Isaiah Shields is currently on the East Coast leg of his journey that began 14 months ago in the state of Washington. His finish line is in Maine. 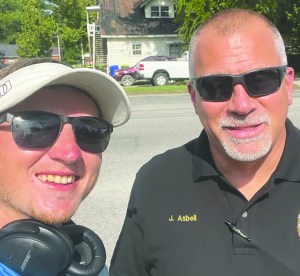 On his tracking map, once reaching the east coast, it appears that Shields followed the US 17 corridor through South Carolina and then US 17, NC 11, and US 13 as he traveled through North Carolina. He walked through Bertie, Hertford, and Gates counties earlier this week.

“What a nice guy with a great way to see America. He told me he just wanted to see America this way [walking],” said Dennis Dunlow of Aulander who chatted briefly with Shields as he passed through the town.

Shields, age 27, is from Provo, Utah where he was formerly employed as a corporate finance analyst.

“This idea entered my mind to walk across the country,” Shields said in a video posted on YouTube. “It wasn’t spurred by anything I read or saw. I did some research and learned that other people had done it. So far it’s been a great experience and I thank all those who have helped me along my journey.

“I don’t want to be one to say…yea, the decade when I turned 30 was a blur,” he added. “I know something like this (walking) isn’t for everybody. Sure, I would love to have a family…wife, kids, maybe a dog, but that shouldn’t preclude you from living a life worth living. There’s a lot of ways to do that. This is one of those ways…walking and seeing America. It gives me time to think about life and what my values are and the things that matter to me.”

Shields constantly updates his Facebook page with the sights along his journey along with documenting his encounters about the people he has met.

“Seeing beautiful old brick historic buildings, some of them with all of the products left on the shelves from the day they closed, never to reopen, like this old pharmacy,” Shields wrote on his Facebook page as he described Aulander.

He said the highlight of the day was meeting Dennis [Dunlow] and Margie [Penwell].

“They were able to tell me tales of when the town was arguably a little closer to its heyday when they were younger,” Shields noted.

His journey took him to Ahoskie on July 12. 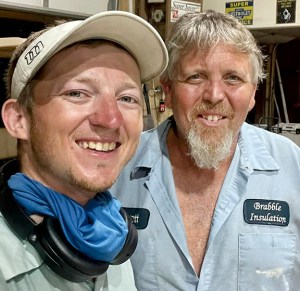 Scott Brabble (right) of Winton gave Isaiah Shields a place to sleep as he stopped for the night in the historic Hertford County town. Photo by Isaiah Shields

“Made it to Ahoskie after an incredibly generous morning. Received from people passing by: water, fruit punch, peanuts, caramel popcorn, a subway sandwich, cookies, directions, many firm handshakes, and a few US presidents and founding fathers [cash],” he wrote on Facebook.

Shields added that he wanted to “check out” Ahoskie due to its claim of being the “only one in the world with that name.”

While in town, Shields said he chatted with Ahoskie Police Chief Jimmy Asbell.

“[He said] he thought what I was doing was admirable and gave me something [a coin bearing the town’s emblem] to remember Ahoskie by,” Shields said.

By nightfall on July 12, Shields was in Winton, saying the town, incorporated in 1766, “has existed longer than the United States themselves.”

It was in Winton where Shields met Scott Brabble.

“Scott pulled over to see what was going on and invited me to stay at his home right here on the [Chowan] river,” Shields reported. “He built the home himself about 15 years ago. What an incredible property. Even comes with a beautiful pup named Zoe.

“I don’t understand the kindness I get to see so often. Today was absolutely incredible on that front. I wish I could tell you all that happened, but I hope Scott’s story is an indication of what it was like,” he added. 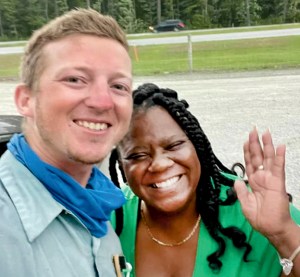 Isaiah Shields poses for a photo with Crystal Saunders outside of Tar Heel Barbecue in Gates County. Photo by Isaiah Shields

Shields said his plan on July 13 was to reach the Virginia state line. He was nearly there until an afternoon thunderstorm sent him inside Gates County’s Tar Heel Barbecue seeking cover.

“I ran into Crystal [Saunders] inside,” Shields wrote. “She said she aspires to lift as many people around her up as she can. In her words “I’ve got degrees, a home, beautiful children and even dogs. I’m not rich, but I don’t even think I want to be anymore. Who wants a big house? All that means is you’ve got to clean it. What I want to do is be able to give to those that need it. I’m happy. I want to help others have a better life.” I told her of all the things someone could aspire to, she’s found herself in a good spot.”

As the rain ended and the skies cleared, Shields…perhaps with a belly full of good, old-fashioned Eastern ‘Carolina barbecue…reintroduced his two feet to the two-lane asphalt. 6,837.5 miles walked to that point. Next stop: Virginia.