Over the course of summer league youth softball history in Gates County, no team has ever advanced to the Tarheel State Tournament.

That is until now.

Last week in Williamston, the Gates 12U team went undefeated, winning the District 7 championship and earning a berth on the Tar Heel Leagues State Tournament. 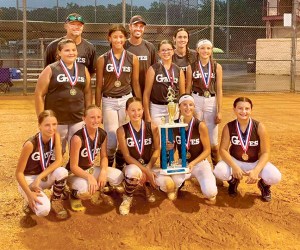 Gates opened the District tournament on July 6 with a 13-3 win over Ahoskie. They met the Camden All-Stars in a Friday, July 8 match-up. That game lasted only a few innings before heavy rain forced a postponement. Gates came back on Saturday and posted a 12-2 win over Camden.

Later on Saturday, Gates faced Camden again (who had worked their way through the loser’s bracket). Gates prevailed again, this time by an 11-5 score which earned the local girls the District title.

“We are absolutely thrilled to have youth softball and baseball back in action at the community center,” said Norris Raby, the Center’s Director. ‘It was a great spring that saw kids ages 7 through 15 getting to play the game they love. To be able to send kids to play in the District 7 Tarheel All Star Tournament was another milestone highlighted by our very own 12U softball team lifting the first place trophy. We are proud of the kids, parents and coaches that helped make this season a reality!”

The Tar Heel Leagues State Tournament is set for July 21-24 in Smithfield. Gates will meet the District 5 champion in opening round action.