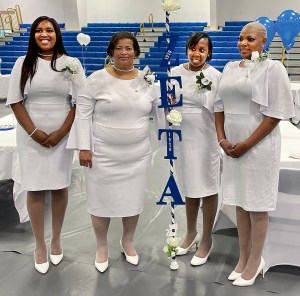 The inductees are Judith N. Boone of Murfreesboro, Kenya Harrell of Gates, Precious James of Hyattsville, MD (formerly of Gates), and Briana Simons Pittman of Lithonia, GA (formerly of Ahoskie).

A reception for invited family and friends was held in Central Middle Schools gymnasium where Soror Kelly Eure is the Principal. The gymnasium was beautifully decorated by Soror Carrie Douglas in white linen chair and table coverings which was highlighted by the royal blue bleachers in the gymnasium.

The newly inducted Sorors (changed into blue and white attire) entered the reception by singing the “Zeta Train ”. They were accompanied by Soror Alisha Melton with a ” ZETA STICK” who read a bio-poem about each to the audience.

Other attendees were Brothers John Horton and Pedro Holley (who was on hand with Greek paraphernalia to purchase from Holley-Fonville Greek.com) from Elizabeth City and members from other Greek organizations.

Refreshments were served and gifts were given to the new Sorors.