Gates County Public School teacher Kristal Brooks has officially graduated from East Carolina University’s PIRATE Leadership Academy (PLA), an effort to support K-12 teachers on their journey to academic leadership roles, and will move on alongside the academy’s 2020 to 2022 cohort to transform education in eastern North Carolina.

Hal Holloman, professor of Educational Leadership at ECU’s College of Education, said the PLA prepares future K-12 principals from eastern North Carolina to earn a graduate degree at ECU and take on academic leadership roles within their school district. 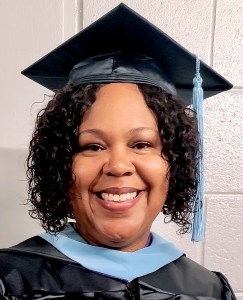 Before her experience with the PLA, Brooks said she was with Gates County Public Schools for over 20 years. Brooks taught as a teacher’s assistant in elementary school level classes in the beginning of her career, she said, later earning her North Carolina teaching certification to teach special education and middle school classes. Brooks has also coached cheer and track throughout her teaching career.

While during her second year at the PLA, Brooks said the death of her sister and family transitions created challenges for her graduate studies. As well as this, Brooks said her son became paralyzed following an accident during this time. Though she faced many challenges, Brooks persevered and said she continued on with her studies through virtual learning and the support of her PLA faculty and peers, earning her degree in Spring 2022.

The PLA tailored the program to fit her needs at the time, Brooks said, and gave her the support she needed to focus on her studies. Throughout her studies, she said she participated in internships at Central Middle School and Gates County High School.

“I can’t say enough about the PIRATE Leadership Academy, how you feel so well prepared because you live it. You know, this is nothing you can just learn out of a book,” Brooks said. “So being able to come out of the classroom for those two years, and actually step in as an administrative intern for those two years, I was able to get the experience that I needed to feel successful.”

Brooks said she has now accepted the position as an assistant principal at Gates County High School following her internship and degree completion. Having already grown connections with the school, Brooks said she’s grateful to continue her work with her newly-accepted position and create new projects that she hopes will positively impact students.

High-risk students are a priority for Brooks, she said, and she hopes to continue to support them on their academic journey and give them the opportunity to see the benefits of continuing their education.

“It was so worth it to just step out there and do what you love, and not be afraid that it’s not going to work out, because it is,” Brooks said. “There are so many people there to support you. There are more for you than there are against you. There’s so much support out there, and people want you to be successful. And the kids need you.”

Holloman said the PLA partners with close to 30 school districts throughout the region to identify the best proven and experienced teacher leaders to serve their communities as school principals. These individuals are then provided the funds needed to return to higher education and earn the graduate degree and licensing required for their desired position, Holloman said. He said some of the costs covered include tuition and textbooks.

Following completion of the PLA program, Holloman said individuals are then given the opportunity to earn a K-12 administrative position within their school district.

There are often passionate K-12 teachers who would like to return to graduate school, and Holloman said many choose not to due to student debt and a lack of support. Because of this, he said the PLA allows teachers to stay in their school district while delivering job-embedded daytime instruction.

“It’s a win for the participant, because they get their graduate school paid for, they get their principal license, and they get really great mentoring and support from our program, as well as from our partnership districts who give great support,” Holloman said.

Each school district selects multiple nominees on an annual basis, and Holloman said the PLA then interviews and screens each nominee in order to select one candidate from each district for that year’s cohort.

The program began with eight districts, Holloman said, and is funded through grants received in 2020 and 2021 totaled at $4.3 million each. For this year’s cohort, he said there will be 28 teachers chosen for the 2022 to 2024 cohort.

“What we have found through the PIRATE Leadership Academy, that this provides an opportunity for districts to say, ‘Wow, we have these outstanding, proven leaders in our communities, in our districts already,’” Holloman said. “Now we need to be able to provide a path for them to go to the next step of their leadership path, you know moving from a teacher leader to a principal and even beyond.”

Holloman said a notable teacher selected for the 2020 to 2022 cohort was Kristal Brooks from Gates County Public Schools. Brooks is a proven instructional leader for both K-12 schools and the community, Holloman said, as well as an outstanding graduate student at ECU. He said Brooks has served as a model for the PLA’s mission and values.

“We want to take care of others, we want to support others, we want to serve others. This is the idea that principals can go into a school and help teachers become the best versions of themselves, to help serve and support students to reach their potential, to help parents and serve families,” Holloman said. “That’s our (PLA) foundation and Kristal really exemplifies that.”