MURFREESBORO – Between ensuring that vendors were well taken care of, assisting with set-up for the afternoon program and greeting people attending the town’s Juneteenth festival on June 18, Murfreesboro’s newest Town Council member found time to grant an impromptu interview. 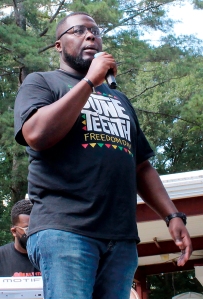 James B. “BJ” Futrell, who is currently serving his initial term on the Murfreesboro board, shed some light on his new role.

“I think that serving on the Murfreesboro Town Council is intriguing,” Futrell said. “It gives me a chance to stretch and grow. It’s great to have a seat at the table and help make decisions. Working with the other town officials and public works department is a rewarding experience. I’m thankful for this opportunity to serve the community.”

“Understanding and working with the budget is my greatest challenge,” he stated. “We deal with setting priorities and still being able to receive funds.”

Although the position is challenging, it also has its rewards.

“Being someone the people know, a resource to the community and in a position of change is rewarding,” Futrell acknowledged. “People have a resource they didn’t have a few years ago. It gives me the opportunity to stretch and grow.”

Many in the Murfreesboro community have said that Futrell has been helpful in bringing more young people into the Juneteenth celebration this year. When asked about this, he responded, “I really assisted with the vendors,” the town councilman stated. “The younger crowd wanted to be more involved. We had different vendors and more public safety officers, and I think that’s helpful. More people are coming together to have more programs in Murfreesboro.”