MURFREESBORO – Ashley Gustafson is charting a new flight path at Chowan University as the new Director of Annual Giving and Brave Hawks Club. This new position reports to both the Department of Athletics and the Office of Advancement. 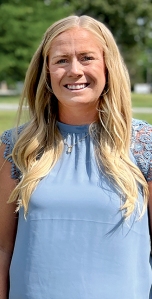 In this leadership role, Gustafson will manage the day-to-day operations connected to the annual giving program in Advancement and the Brave Hawks Club details with membership within the club for athletics. The annual giving program solicits gifts of $10,000 and less for programs throughout the University. She will also lead the University’s Day of Giving which takes place annually in spring.

Patrick Mashuda, Vice President for Athletics and Athletic Director expressed, “we are excited to have Ashley working with Athletics and Advancement in continuing to build on the great foundation that has already been established with the Brave Hawks Club, and to be the bridge in fundraising between the two areas of the university.”

Vice President for Advancement Andy Wilson shared, “I am thrilled to have Ashley Gustafson join the advancement team. Her background in fundraising and athletic club implementation was a plus in selecting Mrs. Gustafson for this role.”

Gustafson received her BS in Mathematics with a concentration in Secondary Education from Morehead State in 2010 and her MBA from UT Martin in 2014. She is married to Eric Gustafson, Director of Sports Medicine at Chowan.