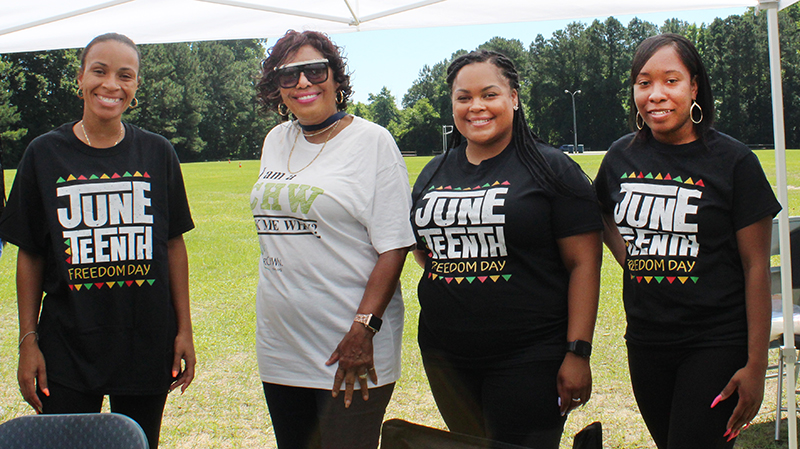 MURFREESBORO – Riverside Park near the Meherrin River in Murfreesboro was the site of the town’s second annual Juneteenth Freedom Day Celebration on Saturday, June 18.

Even though the festival began at 11 a.m. with vendors available, the program began at 4 p.m. 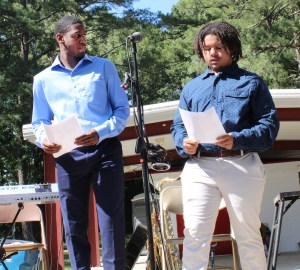 “This is not just a day of remembrance, but a day of calling to action,” Murfreesboro Mayor Hal Thomas said in the welcome.

Vaughan explained that Juneteenth commemorates the effective end of slavery in the United States. Juneteenth, short for June Nineteenth, marks the day when federal troops arrived in Galveston, Texas in 1865 to take control of the state and ensure that all enslaved people be freed.

Vaughan, a musician who will obtain his degree in December, plays the saxophone, clarinet and drums.

“I’ve been involved in music since my youth, taking piano and vocal lessons, singing solos, in church choirs and chorus,” he stated.

He has performed with such national musicians as Delfeayo Marsalis and the Black Theatre Festival in Winston-Salem.

Ashton Todd and Jelani Ruffin read the Juneteenth-based poem “One Soldier, One Freedom,” written by Jeffrey Parker. All observed a moment of silence while local musician Henry Britt played “Taps.”

Jackie Ruffin Pittman performed a libation ceremony honoring soldiers of the US Colored Troops. Jelani Ruffin poured water from a pitcher onto a plant while Pittman read the soldiers’ names. Pittman sang “Peace Be With Us,” explaining, “This song is often sung in ceremonies, such as libations.”

“A lot of our ancestors were from West Africa, and the architectural style of the buildings is West African,” Pittman said.

She displayed the book explaining this – The Builders and Architecture of Historic Murfreesboro, North Carolina, 1585-1865 by Alice Eley Jones. 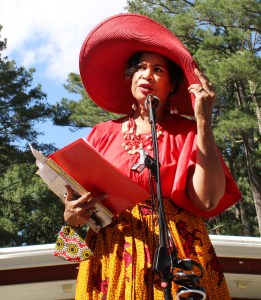 Jackie Ruffin Pittman tells the history of African slaves who first came to the Roanoke-Chowan area. Photo by Cheryl Deloatch

“On July 28, 1863, Union troops came to Murfreesboro and liberated some of the slaves. They left with the troops,” Pittman stated. This data came from the book Trial Separation: Murfreesboro, North Carolina and The Civil War by Dr. Thomas C. Parramore. The Murfreesboro Historical Association sells both books.

The Praise Team of Mt. Sinai Church of God in Murfreesboro sang the Black National Anthem, “Lift Every Voice and Sing” and other inspirational selections.

Wreaths decorating both sides of the stage enhanced the day’s festivities. The wreath on the left held a red, black and green flag. Cultivator organizer Caroline Stephenson referred to an article published on National Public Radio’s website in June 2017 entitled, “On Flag Day, Remember The Red, Black and Green” to explain this. In part, the article states this flag was created almost a century ago to represent people of the African Diaspora. Diaspora refers to “any group that has been dispersed outside its traditional homeland… .” (dictionary.com). The wreath on the right side of the stage was the American red, white and blue flag.

“I thought it went very well,” Town Council member Berna Stephens said. “Attendees were very orderly, and it was a great fellowship. People who hadn’t seen each other in a long time were able to reconnect. Some felt the program was too late.”

“Juneteenth 2022 was priceless,” Murfreesboro native Carlton Stephenson, Jr. remarked. “It gave us the opportunity to come home, fellowship with family and friends, and celebrate our heritage.”

The vendors were as much a part of the Juneteenth festival as the program was. Some vendors donated products, provided information about their programs or services, and others sold items.

“We did a lot with COVID, such as giving away cleaning supplies,” explained Alice Anderson. Anderson and her colleagues brought items to promote cleanliness.

People for the Ethical Treatment of Animals (PETA) is based in Norfolk, Virginia but comes to residents’ homes in Hertford, Bertie, Northampton, Gates and Halifax counties. Olivia Rasquiza represented PETA at the Juneteenth festival.

“People can call if they need us,” she said.