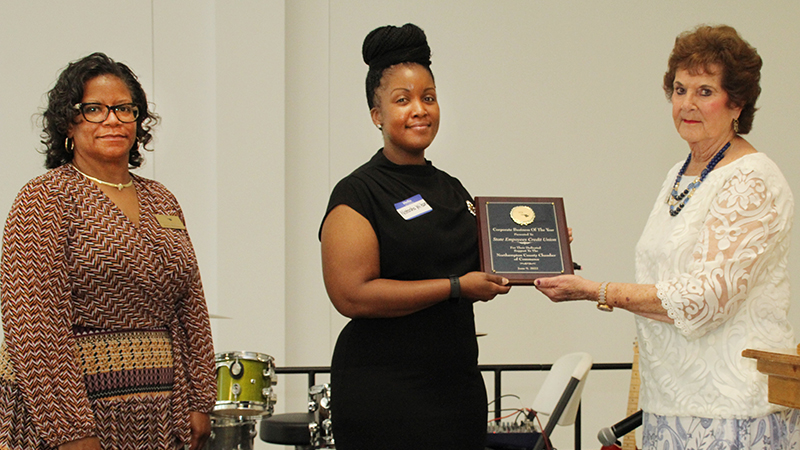 JACKSON – “My roots determined my route.”

That one short sentence accurately summed up the point Eddie Buffaloe Jr. made during his remarks here last week where he served as the guest speaker at the Northampton County Chamber of Commerce banquet.

The event, held at the Northampton Cultural and Wellness Center, attracted a large crowd of local individuals, business owners, and government officials.

In his remarks, Buffaloe – a Northampton native who was appointed last year by Gov. Roy Cooper as the Secretary of the North Carolina Department of Public Safety – noted that his home county was founded in 1741. 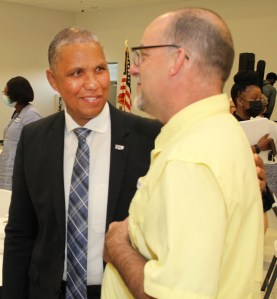 “We can offer good sound support of one another in order to maintain a good route,” he added. “You can’t continue to talk about how bad things are when we can’t come together on those things that we know are good for us all.”

Buffaloe credited his schoolteachers for giving him and countless other students a solid educational foundation on which to build.

He also credited his parents (Eddie and Ruth Buffaloe) for keeping him on the straight and narrow.

“They planted the roots of determination, work ethic, a golden rule to treat everyone the way you would want to be treated,” he stressed. “Their roots of a formal education, love, and support gave me the route of law enforcement over 30 years ago. We didn’t have a lot of money, but we had good roots that were nurtured and cared for which in-turn gave me success, and today I stand here as the Secretary for the N.C. Department of Public Safety.”

Buffaloe – who worked as a correctional officer, drug enforcement agent/lead investigator, police chief, and city manager prior to becoming Secretary of Public Safety – said there is still hope for Northampton County.

“This county needs you to stay on the route, but that route will have some bumps, potholes, curves, and hills; so in order to stay the course you must stay in drive,” he stated. “The road to success is not straight, there is a curve called failure, a loop called confusion, speed bumps called friends, red lights called enemies, and caution lights called family.

“You will have flats called jobs, but if you have a spare called determination, an engine called perseverance, insurance called faith, and a driver called your God, you will make it to a place called success because your roots will determine your route,” Buffaloe concluded to a standing ovation.

The banquet included the presentation of several awards.

Upper Cutz Barber Shop of Rich Square, owned and operated by Horace Robinson, was selected as the 2022 Small Business of the Year.

The State Employees Credit Union earned the 2022 Corporate Business of the Year award. That honor was accepted by Natasha Wilson representing the SECU’s office in Jackson.

In addition to the awards, Patrice Jordan of Roanoke Electric presented the Northampton Chamber a check for $250 to assist with their annual July 4th celebration.

Judy Collier, Executive Director of the Northampton Chamber, recognized Robin Williams for her service as a Chamber Board member as well as serving as the Board president, past vice president, and past secretary. 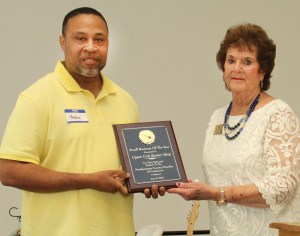 Collier also signaled out several new members of the Chamber.

“For the past two years, just as every business has been impacted by the pandemic, your Chamber is not any different,” Collier said. “But this year, things have picked up a lot and we have quite a few new members who have joined the Chamber since July 2021: Tussie Phillips Boone, Sidney Joyner, Cassaundra Person of Pendleton representing Sisters Haven, Cheryl Wray Edwards, Michelle Jordan of Rich Square, G.S. Hux & Company, Otisha Garner of Weldon, and Richard Farrow and Sons. Thank you for supporting our Chamber. We also thank the continuing support of Northampton County Local Government.”

Backed up by his band, Deion Warren of Conway, who participated in The Voice on NBC in early 2021, provided the entertainment at the event.