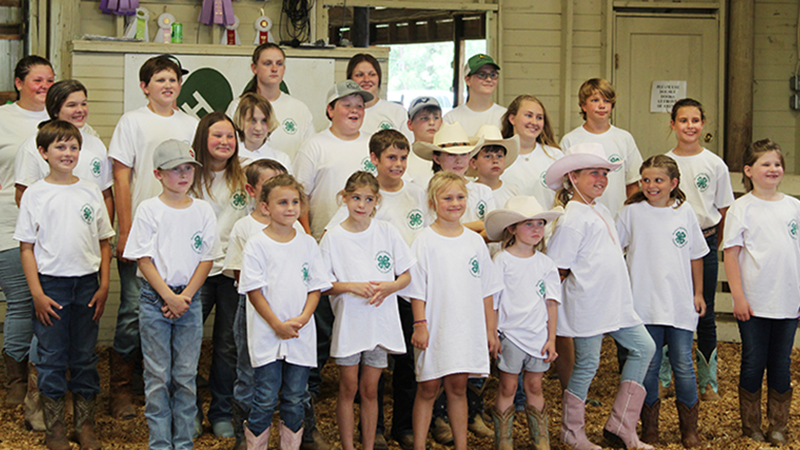 Local youngsters pose for a photo prior to participating in the annual 4-H Livestock Show and Sale held June 8 in Murfreesboro. Now in its 40th year, the event is coordinated by the Cooperative Extension offices of Northampton, Hertford, and Bertie counties. See the News-Herald’s Facebook page for more photos from the event. Staff Photo by Holly Taylor

MURFREESBORO – The summer heat did not deter participants or their animals at this year’s 4-H Livestock Show and Sale, held here Wednesday, June 8.

The participants, ranging in age from 9 to 18 years old, competed in showmanship and market categories with animals they’ve raised over the past several months. In addition to the competitive categories, children aged 5 to 8 years old had the opportunity to participate in the noncompetitive “cloverbud” category to get a taste of what a livestock show is like. 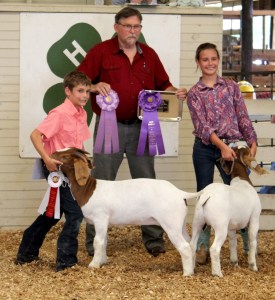 Judge Ronald Hughes displays the top two awards handed out in the Market Class Goat division at Wednesday’s annual 4-H Livestock Show and Sale. Those honors were earned by Jase Pope (left), whose goat was judged as the Reserve Champion, and Jessa Pope (right), who showed the Grand Champion goat. Staff Photo by Holly Taylor

The annual 4-H event, which celebrated its 40th year this June, is a joint effort coordinated by the Cooperative Extension offices of Northampton, Hertford, and Bertie counties.

A variety of livestock are presented to a judge during the show, including lambs, swine, and goats. Ronald Hughes served as the judge for this year’s event, bringing many years of experience to share. He has judged livestock shows all over the East Coast – many of which have been in North Carolina – and is currently retired from NC Cooperative Extension but helps supervise some livestock shows at the State Fair.

In the showmanship category, participants are judged on how well they handle and know the animal they raised. As they lead their animal around the ring, the judge asks them questions to gauge their knowledge while also watching their interactions with the animal.

During the senior division of the goat showmanship show, for example, Hughes asked the two participants to temporarily switch so he could judge how well they were able to handle an unfamiliar animal.

In addition to the showmanship show, the livestock are also judged in the market class, which is divided into weight categories for each animal. For the market class, the winners are selected based on muscular development, finish, structure, size, and carcass qualities, or maternal development and breeding qualities.

A grand champion and reserve champion for each livestock category are named from the market class divisions.

The top winners in each market category were as follows: 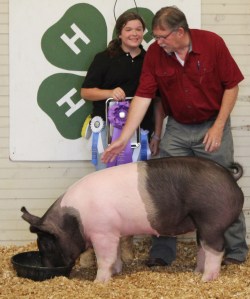 Chloe Long’s (left) hog was judged as the Market Class Swine Grand Champion. She is shown with Ronald Hughes, who served as the judge at the annual 4-H Livestock Show and Sale.

Prior to selecting the grand and reserve champions, the 4-H’ers competing in the market class had their animals judged either in the lightweight class or heavyweight class. The top two winners in each market class division were as follows: 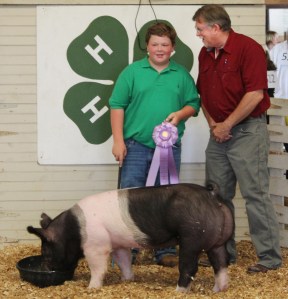 Family and friends gathered in the livestock arena to cheer on the 4-H’ers during the event. Some animals were a bit stubborn, but the children all gave their best in front of Judge Hughes, who offered advice and encouragement for future shows.

Following the afternoon’s events, the day concluded with a dinner and then an auction of the grand and reserve champion animals. Parker Phillips returned once again to serve as the auctioneer, a role he’s held since the first Hertford-Northampton livestock show.

Brandon Pike, who serves as the Livestock Agent for Northampton County’s Cooperative Extension, said the annual show is a fun experience for the children to show their animals and also demonstrate to the community all the knowledge and skills they’ve learned along the way.

“The livestock show and sale is the highlight of my year as a 4-H agent,” added Sara Villwock from Northampton County’s Cooperative Extension.

Villwock said the participants learn not only how to take care of their animal and handle them in the show ring for the event, but also responsibility and the cost of the animals as they raise them. The program helps participants use their head, heart, hands, and health, which are what the “4-H’s” stand for.

“All of which are great life skills that 4-H teaches youth in our programs,” she concluded.