The ‘best’ of Bill 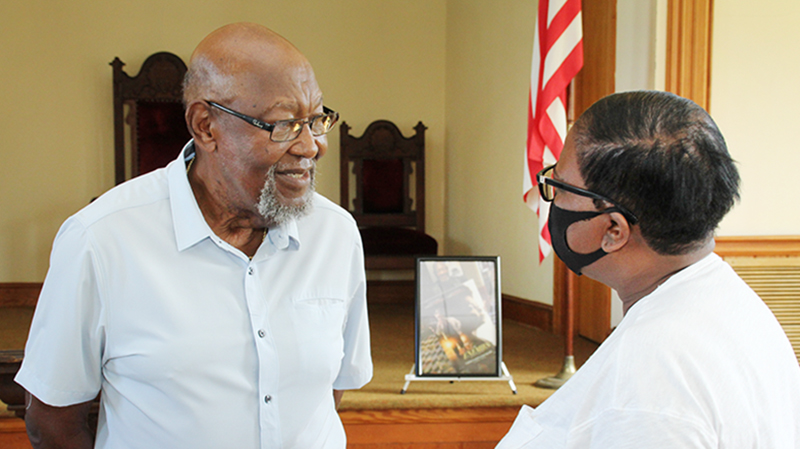 Como native Bill Riddick chats with an individual following his presentation on Saturday morning at the Fellowship Building of First Presbyterian Church of Ahoskie. Staff Photo by Cal Bryant

However, that rallying cry of social justice in 2022 wasn’t widely accepted in 1971….that is until Ann Atwater met C.P. Ellis.

“The Best of Enemies” is a film based on a true story about the total desegregation of the public school system in Durham County in the early 1970’s. On one side of that social battle is a loud and bold Civil Rights activist (Atwater, portrayed by Taraji P. Henson) who is bound and determined to have Black students enjoy the same educational privileges of white youth. On the other side is the intimidating presence of White Supremacy, the head of the Durham County chapter of the Ku Klux Klan (Ellis, whose character is played by Sam Rockwell).

In the middle is a Hertford County native, who proclaimed to struggle with his own inner demons of bias before calmly convincing both sides to set aside their vast differences and do what is right for the innocent children. What transpired over the course of a nine-day charrette (a meeting where stakeholders attempt to resolve conflicts and map out solutions) proved a point that we can all learn from, then and now, that when people of all races just sit down and listen, amazing things can and will take place.

Bill Riddick (aka Willie Lee Riddick Jr.), born and raised in Como, was summoned from his home in Raleigh in 1971 to head-up the charrette, which later became the subject of the 2019 movie.

Riddick, through an invitation from the Ahoskie Woman’s Club, shared his experiences from 51 years ago this past Saturday morning as he addressed local residents inside the Fellowship Building of First Presbyterian Church.

He began with a bit of his personal background, to include graduating from C.S. Brown High School in Winton as well as from North Carolina A&T State University. He went to work with North Carolina Cooperative Extension. It was during his time with Cooperative Extension where he learned of a gift God had bestowed upon him….dealing with different people from different backgrounds.

“I’ve been truly blessed to travel a great deal and touch lives of people who were suffering,” he said.

He later taught Social Work at UNC-Chapel Hill and then landed a job in administration at Shaw University. It was there (at Shaw) where he was involved in his first charrette. He later led charrettes dealing with various challenges in Indianapolis, Indiana and York, Pennsylvania before being approached about the integration issue in Durham.

“Going in I thought everything would be okay because I knew some influential Black people, business owners, in Durham,” Riddick said. “But not a single one would help me, saying it would mess their business up. I told them that their lives were already messed up because they were being told to stay on their side of the tracks.”

Once the Durham charrette got underway, Riddick was thrust into the role of peacemaker between Atwater and Ellis.

“This is going to be strange,” Riddick remembered saying to himself at that time. “We had a couple of organizational meetings before the charrette got started and he (Ellis) would not sit down with us. He would pace the floor near our table.

“The very first day of the charrette was the hardest work day I had ever had in my life,” Riddick continued. “I went home and told my wife I wasn’t going back, but she gave me the inspiration to do so. She told me that I had to first get past the bias I had for those folks (Atwater and Ellis). She told me that I was the one with the problem.”

That advice, Riddick said, opened his eyes and his heart.

“I got quiet and let them talk,” he said. “They worked out their differences by putting themselves in the shoes of their adversaries and figuring out their source of anger and frustration.”

Riddick recalled one powerful moment that made him believe the charrette would end with positive results.

“I was standing so close to C.P. that I could have placed my arm around him and he reached into his pocket, pulled out his KKK membership card and tore it in half,” Riddick shared. “And his people, other Klansmen, were there. That really, really moved me.”

The movie plot centers on the plight of children living in one Black community in Durham who are forced to look for educational alternatives after a fire destroys their elementary school. The end-game of the 12 individuals comprising the charrette is to vote (by two-thirds majority) on whether or not to recommend school integration to the Durham City Council.

Riddick and his now late wife were able to attend several sessions of the filming of the movie.

“I didn’t realize what a task it is to shoot a movie,” he stressed.

Riddick did have some influence on the actor, Babou Ceesay, who played his role in the movie.

“I noticed how quiet he was; I told him to be more bold,” Riddick said.

He added how the Durham charrette changed his life forever.

“First of all, I didn’t know I was biased against some people until then,” he said. “I got that straight. Secondly, if people can come together and stop screaming and yelling at each other, have a civil conversation, and respect where that person stands, they can get along. I have used that throughout my career, all over the United States, since that time. God has been so good to me.”

Pat Byrd, chair of the Ahoskie Woman’s Club History Museum, was instrumental in getting Riddick to come to Ahoskie to share his story.

Byrd said her conversation with Riddick leading up to Saturday’s event was delightful.

“He’s such a charming man,” Byrd said. “We’re so excited to have him here. I would encourage those who haven’t watched this movie to so do. Yes, it’s a movie about helping to integrate Durham schools, but that’s just one little piece about it. To me, what it is really about is how someone, following God’s principles about how to love your enemies, does the right thing and changes people’s hearts. Mr. Riddick helps people by playing an influential role in their lives. He has helped them live a better life.”

Directed by Robin Bissell, “The Best of Enemies” is currently available on Netflix.