Faith has faith in her plan

GATESVILLE – Faith Martin has a plan and she’s bound and determined to stick to it. And that plan is more than just playing a sport she so dearly loves.

Martin, who graduates June 10 from Gates County High School, plans to continue her education at Fayetteville Technical Community College (FTCC) where she has placed her name on a scholarship to play softball. That comes after a banner softball career at Gates County. 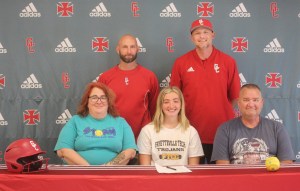 But the decision to enroll at FTCC wasn’t made entirely based on an opportunity to play softball at the collegiate level. Rather, she sees FTCC as the first step in fulfilling her career goal of becoming a mortician.

“I wanted to attend a college that offered a major in Funeral Service Education as well as having a softball team and Fayetteville Tech was the only one I found that filled both of my goals,” said Martin, the daughter of Patrick and Elizabeth Martin.

The softball program at FTCC is relatively new, only in its fourth year.

“I hope to provide them with good pitching, catching, and playing shortstop,” she noted. “But the real reason I’m going there is for education. My plan is to get my degree, then find a job as a mortician, save some money and go back to school for a business degree and then open my own funeral home.”

Martin, one of just two seniors on the Lady Red Barons roster, concluded her four-year career with a .514 batting average during the 2022 campaign. She had 18 hits in 35 at bats, to include 10 doubles, and drove home 20 runs.

Despite a 5-6 record on the mound, Martin had an amazing ERA (0.67). She started 10 of her team’s 18 games on the mound and finished six of those, including three by shutout. She worked a total of 52.1 innings, allowing 33 runs (only five earned runs). She fanned 47 batters and walked only five.

“Faith has been a four-year player for the Lady Red Barons and is a very talented young lady on and off the field,” said GCHS head softball coach Travis Riddick. “She had a great senior year with a .514 batting average and did the majority of our pitching for us, especially down the stretch and collected five wins on the season.

“I am very proud of Faith and am very happy for her to be able to attend Fayetteville Tech and continue playing the sport she loves at the next level. She will be missed here at GCHS and I wish her the very best in her future endeavors,” Riddick added.

Softball has been a part of Martin’s life since age 8. She played for 10 years as an infielder and a pitcher with Coastal Storm, a travel ball team based in Virginia.

“My sister, Shelby, played softball, so I guess I followed her,” Faith said. “I tried it and fell in love with it.

“My senior [at GCHS] was my best year….I really loved playing for coach Riddick,” Martin added. “He really knows the game and didn’t fuss at us all the time.”