WINDSOR – For a high school basketball career that had its ups and downs, Yazmonasia Boone can count hers as ending on a high note.

After failing to make the varsity team as a freshman, the 5’ 7” point guard, who is deceptively quick and a deadly outside shooter, sat near the end of the bench for her sophomore season, then missed all of her junior year due to the cancellation of the Falcons’ entire schedule due to COVID. 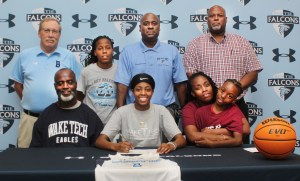 Boone and a senior dominated team bounced back in a big way for their 2021-22 campaign. The Lady Falcons finished the season at 23-5, running roughshod through the 1A Four Rivers Conference with a 10-0 mark and making the school’s first ever appearance in the NC High School Athletic Association state championship game in Raleigh’s famed Reynolds Coliseum on the NC State University campus.

Boone finished her prep career appearing in some 60 Bertie games. Her nearly 15 points per game (14.7) during her senior season brought her career average up to near double-figures (9.9 points-per-game).

While the ladies didn’t bring home the title banner this year, they were celebrated across the county for their success, losing just four games before the state showdown: twice each to Hertford County and Northeastern.

For Boone, the cherry on top was deciding on the next phase of her career, and on Tuesday – the final day of May – she signed her Letter-of-Intent, and it will return her to the state capital where she will attend Wake Technical Community College. Following a short courtship between player and school, it was love at first sight.

“I got a chance to talk to the coach (Alison Beasley), to meet the team, tour the campus, and I just enjoyed being there,” Boone revealed prior to inking the necessary paperwork. “I enjoyed the atmosphere, the way they conducted their practices and everything. Plus, they had a really good season, so I just want to go there and contribute and help them have a better season next year.”

Finishing near the top of her class, she also drew interest beyond the white lines of the hardwood.

“Now for academics, my other choices included UNC-Greensboro and North Carolina A&T,” she said. “I want to study Computer Programming.”

Boone hopes to excel in the classroom as well, perhaps going on to finish at a larger school a couple of years from now.

“Being a community college I knew it [Wake] was a two year school,” she remarked. “So after that I’m looking forward to going into a four year college for my last two years. It’ll be education first. We’ve got to get to college first and then basketball will just come with it.”

Two weeks ago, she carried off more hardware at the annual Bertie Sports Banquet.

“This year has been a great senior year, but honestly, it could have been a better year,” she wistfully reflected. “Don’t get me wrong, I enjoyed my self, I enjoyed being with my team, the coaches, it was just altogether great.

“We could have won it all, we got right there, but couldn’t get over that last hurdle. But there’s no disappointment; I’m really proud of everyone and what we did this season,” she said.

Boone says now that this group of championship seniors have hung up their uniforms for the final time, she wants the school’s success to continue.

“I think we left a legacy for the Bertie teams that come behind us,” she observed. “I want that legacy to be another group of young ladies to go farther than we did and to just win it all.”

Perhaps college won’t be the end of her career of squeaking sneakers. There is more out there beyond the walls of academia.

“I’d like a future in the WNBA, even playing overseas,” she added. I want to be prepared for whatever happens.

“I want to take my basketball farther; I hope to go as far as basketball will take me,” she concluded.