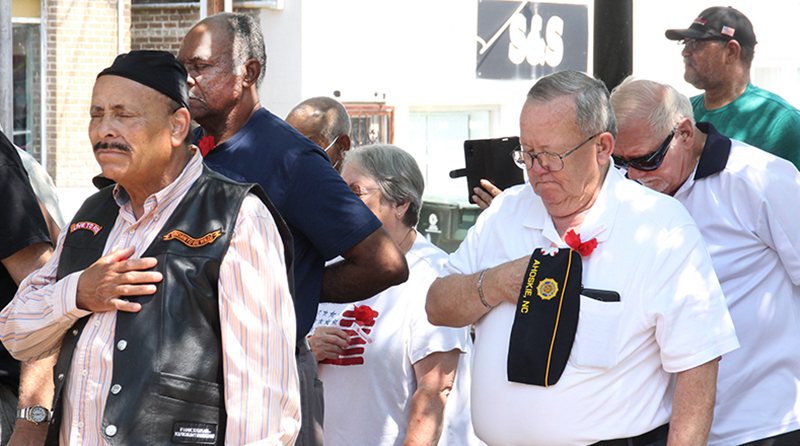 AHOSKIE – Those who made it home alive after the ravages of war are hailed as heroes. But the real heroes are the ones who arrived back on their native soil in flag-draped coffins.

Post 102 member Jesse Dickens, who spent 21 years in the North Carolina Army National Guard – to include a tour of duty in the Iraq War – served as the event’s speaker. 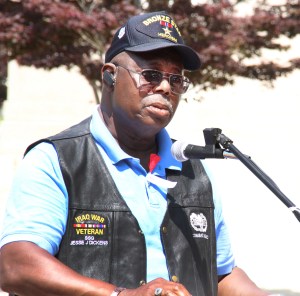 “Military veterans are those who made a commitment to serve their country,” Dickens said as he opened his remarks. “These individuals took an oath to protect and defend this great nation. They agreed to fight to protect ideals and the freedom and well being of their fellow citizens. They were deployed all over the world.

“Some of these men and women made the ultimate sacrifice by giving their life in defense of our great nation,” he continued. “That’s why we’re here today, to pay honor and show our respect to those souls we lost. By being here today we make their memory much more meaningful.”

Dickens added there are different ways for individuals to memorialize their fallen heroes.

“Some built monuments, some erect shrines, and some keep a shrine in their hearts,” he noted. “But I have to believe that each one of you here today hold a memory of someone who made that ultimate sacrifice. It could have been a brother, a sister, a father, a mother, a grandfather, a neighbor that you know personally.”

Dickens said there have been several conflicts that claimed the lives of American troops long before there was a special day to recognize them. As examples, Dickens pointed out the American Revolution, the War of 1812, the Spanish-American War, and the Civil War.

Laying flowers on the graves of those killed in the Civil War (known then as Decoration Day) was the predecessor of Memorial Day.

“Since that time we have seen too many generations caught in the savagery of too many wars,” Dickens remarked. “What began as a memorial of fallen heroes of one war is now a day to honor the casualties of all wars.”

“That’s why we’re here today, to remember them,” Dickens stressed. “And I would be remiss if I didn’t address the issue of suicide among our military veterans. We may consider that loss of life as causalities of war because many of those veterans had seen combat. We must not forget that the sting of war is ongoing.”

Dickens added that the importance of placing flowers and miniature American Flags on the graves of those killed in battle remains strong today.

“My task, along with others speaking at Memorial Day events all across our nation, is not merely to remind you of the past sacrifices made by our fallen comrades, but rather to inspire us to appreciate what we have in times of peace,” he said. 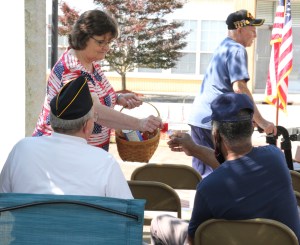 Evelyn Ann Rawls, a member of the Post 102 Auxiliary, hands out poppies to those attending Monday’s Memorial Day program held at No Man’s Park in downtown Ahoskie. Staff Photo by Cal Bryant

In closing, Dickens noted that “we do our fallen heroes no greater honor than to keep alive what they gave their lives to preserve: love of country, duty, honor, and defense of the right given us to see and so what’s right. God bless America.”

Post 102 Commander James Hutchinson presided over Monday’s ceremony. He noted this was a special time of the year for the local Legion Post as they go out into the county and place flags on the graves of military veterans.

“As we stand over those graves we try to figure out if they were lost during war,” Hutchinson stated. “When you figure that out it brings a chill up your spine as you stand there beside the grave of someone who gave their life for our country.”

Joyce Hutchinson, a member of the Post 102 Auxiliary, read the poem – “In Flanders Fields.”

The program ended with the playing of Taps.