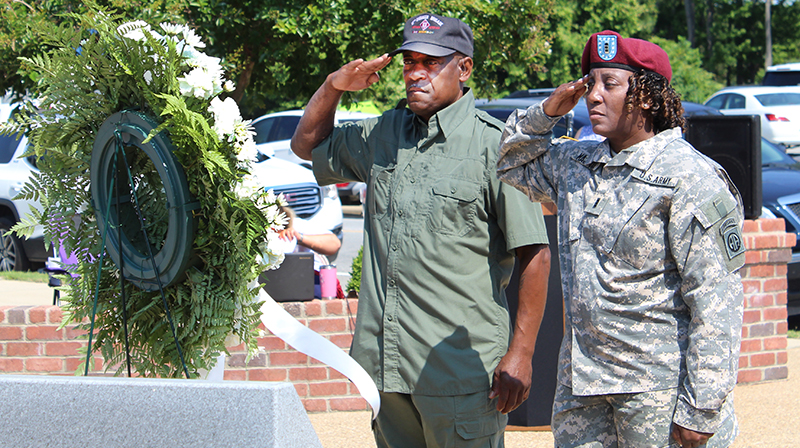 CONWAY – People of all ages gathered at the Veteran’s Memorial Park in Conway on May 30 to remember those who’ve paid the ultimate sacrifice in service to the United States.

“Opportunity, legacy, duty, purpose, patriotism. The reasons behind choosing military service differ from person to person. But as varied as the reasons are, there’s a universal understanding that service means sacrifice. Even if that sacrifice is one’s own life,” said Rev. Willie McLawhorn, who served as the speaker for Monday’s event. 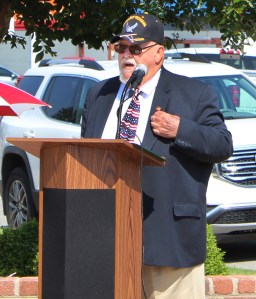 Rev. Willie McLawhorn, the featured speaker at Conway’s ceremony, points to the Gold Star pin on his jacket. Staff Photo by Holly Taylor

McLawhorn, pastor of Menola Baptist Church, is also a veteran who served in the US Air Force from 1968 to 1972.

In his opening remarks, McLawhorn noted the Gold Star lapel pin on his jacket, which is given to the families of those who died while serving in the military. Rev. McLawhorn’s son, Sgt. Willie A. McLawhorn, Jr., was killed in action in Afghanistan in 2010.

“The death of servicemembers touch more than just the lives of their loved ones and friends,” he continued, explaining that their stories still live on and become a part of their communities.

McLawhorn mentioned several ways fallen soldiers are honored and remembered, including the battlefield cross, services and ceremonies at the bases where they served, and tributes to those still missing in action.

But the bulk of Rev. McLawhorn’s words were centered on sharing the story of two marines who were killed in action in Iraq in 2008. He quoted the story from a speech by retired General John Kelly about their final sacrifice.

Corporal Jonathan Yale and Lance Corporal Jordan Haerter were standing guard together that day in 2008, outside of their outpost when a suicide bomber drove a truck full of explosives at them. Instead of running to save their own lives, the two soldiers stood their ground to make sure the truck didn’t make it through and endanger the soldiers inside.

Security footage of the incident showed that it took only six seconds from when the truck appeared in the alley to when it exploded.

“In all of the instantaneous violence, Yale and Haerter never hesitated,” McLawhorn quoted. “By all reports and by the recording, they never stepped back. They never even started to step aside. They never even shifted their weight. With their feet spread shoulder width apart, they leaned into the danger, firing as fast as they could work their weapons.”

According to the report, their sacrifice saved 150 people, both American soldiers and Iraqi police, who were housed at the outpost.

McLawhorn wrapped up his speech by urging the crowd to remember what fallen soldiers have sacrificed and to continue sharing their stories.

“Let us tell their stories, far and wide, every chance that we get,” he concluded.

Following McLawhorn’s remarks, George Majette (SP5- US Army, 1966-1972) and Thelma Majette (W3- US Army, 1988-2008) laid the ceremonial wreath together in the center of the park. The two veterans are father and daughter. 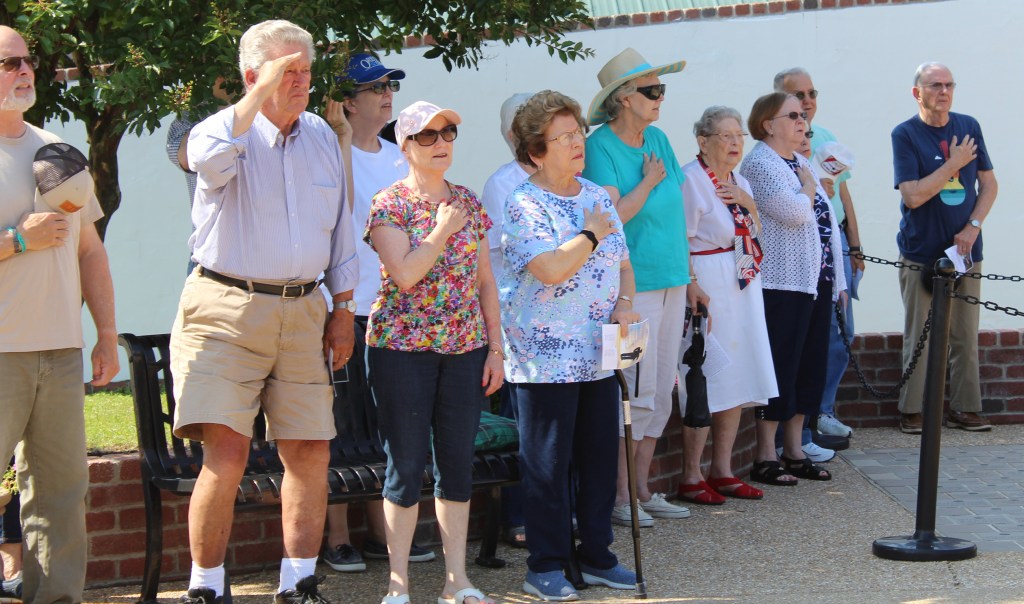 A portion of those attending Monday’s Memorial Day program in Conway stand during the playing of the National Anthem. Staff Photo by Holly Taylor