Dylan Lilley, a native of Gates County, was appointed last month as Extension Director. He will serve in a dual role as the Agriculture Extension Agent.

“Coming out of college I was interested in becoming an ag teacher in high school or working in Extension,” Lilley said. “I guess my admiration of farmers and having the opportunity to work with them and demonstrate best practices is what led me to a career with North Carolina Cooperative Extension.” 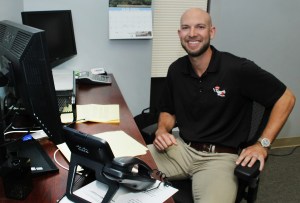 Dylan Lilley has been named as Director and Agriculture Extension Agent at the Hertford County office of North Carolina Cooperative Extension. Staff Photo by Cal Bryant

That career began in 2016 as the Field Crops Agent with Perquimans County Cooperative Extension.

“That was a great experience there; I enjoyed my time in Perquimans County,” he stressed. “When the job opened here in Hertford County as the Director and the Ag Agent, I saw it as an opportunity to further my career in Extension.”

Lilley added that he is looking forward to working with the farmers in Hertford County.

“I’m here for them, and also to work with the public to address their horticultural issues with their lawns or gardens,” he said. “You get to meet and assist more of public that way and that’s what Cooperative Extension is all about.”

“They do a great job,” Lilley noted. “Right now we’re still looking to fill our Family Consumer Science position to fill out our local team. We’re all about working to better the lives of people here in this community.”

As is typical with employees within Cooperative Extension, Lilley has a personal connection to agriculture.

“I grew up on our family farm near Gatesville, helping my dad,” Lilley said. “We are a row crop farm – cotton, soybeans, wheat, and corn –and at one time raised hogs.”

Dylan is a 2011 graduate of Gates County High School where he played three sports – baseball, basketball, and football. Four years later he earned a degree in Plant and Soil Science from NC State University.

“After I graduated from State, I joined Agri Corps. They’re similar to the Peace Corps,” Lilley explained. “My group spent a year in Ghana (West Africa) where I had three roles: an Extension agent, an agriculture teacher, and a 4-H advisor. I taught at a middle school in a rural village.”

“I had never been out of the United States before that year in Ghana,” he said. “It was a great experience, one that taught me a lot. We were able to share a lot about agriculture to them and also assisted them in starting a 4-H program.”

Another plus coming out of that overseas service was it was where he met his future wife, Paige.

“She was part of the Agri Corps program,” Lilley said.

The couple resides on the family farm outside of Gatesville with their daughter, Annabelle (age 1) and another child on the way in October.

Lilley, who also earned a Master of Science degree through Virginia Tech in 2020, comes to Hertford County at a time where local farmers, as well as those across the nation, are experiencing sharp increases in their input prices.

“Fertilizer, fuel, seed and chemicals are extremely costly nowadays,” he stressed. “It’s going to be a challenging year, so we’re hopeful for good weather, have a good growing season, and good prices at harvest.

“I’ve heard a lot of good things about the farmers in Hertford County so I feel they will find a way to make it work out. I just what to let them know that I’m here for them to help make them profitable,” he added.

To learn more about the programs offered through Hertford County Cooperative Extension, call 252-358-7822 or visit the office located at 301 West Tryon Street in Winton.