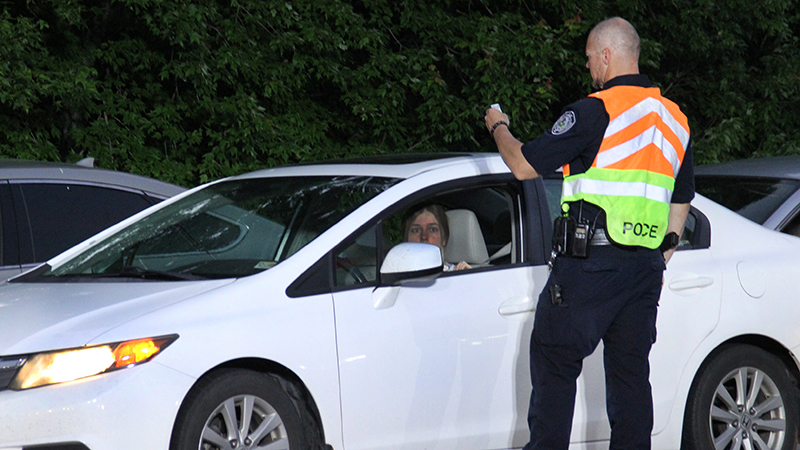 Officers from the Ahoskie Police Department were part of a law enforcement team that took part in a traffic checking station on May 20 near Murfreesboro. Staff Photo by Cal Bryant

AHOSKIE – In an effort to promote traffic safety and keep a close eye on high crime areas, the Ahoskie Police Department hosted an enforcement event on May 20 to kick off Operation Safe Summer.

The North Carolina Department of Health and Human Services deployed a BAT Mobile to Hertford County during the Operation Safe Summer event. BAT (Breath Alcohol Testing) comes packaged in a specialized RV, complete with breathalyzer work stations and a room used by a Hertford County Magistrate who set bonds and court dates for those arrested.

“We may wear different color uniforms, but we all take the same oath and that’s to protect and serve the public,” said Ahoskie Police Chief Jimmy Asbell. “We appreciate the collaboration among the various law enforcement agencies here in Hertford County as well as our partners at the state level. We had a very successful operation.”

Asbell said the operation consisted of two traffic checking stations, one located on US 258 near the Meherrin River bridge in Murfreesboro and the other on US 13 south of Ahoskie.

As a result of those checking stations and saturation patrols, Operation Safe Summer yielded four DWI citations, five drivers cited for restraint violations, seven for not having an operator’s license, 12 citations for driving while license were revoked, 11 citations for vehicle registration violations, 15 speeding tickets, and 16 other traffic citations.

Additionally there were 15 drug charges filed as well as two fugitives arrested.

As the Memorial Day weekend marks the unofficial start to summer, AAA predicts that the number of people who will travel by automobile will increase by 4.9% in comparison to last year. With this in mind, the North Carolina State Highway Patrol will take steps to monitor driver behavior in an attempt to reduce collisions that occur from speeding, impaired and distracted driving, as well as reducing the severity of collisions through seat belt use enforcement. Using the Vision Zero approach, law enforcement officials hope to report zero fatal collisions throughout the holiday weekend.

The State Highway Patrol has once again combined forces with the NC Wildlife Resources Commission to participate in the annual On the Road, On the Water campaign. The campaign will be conducted throughout the weekend with an intense focus on removing impaired operators of boats and motor vehicles.

Additionally, the SHP is partnering with the NC Governor’s Highway Safety Program’s Click It or Ticket campaign. This campaign will involve two seven-day enforcement periods, beginning May 23-29 and May 30-June 5, with an emphasis being placed on seat belt violations.

Motorists are encouraged to follow these suggestions while traveling:

Plan Ahead – Plan routes in advance to include secondary routes, detours and possible road closures. Up-to-date information regarding delays and closures can be found at www.DriveNC.gov.

Slow Down – Obey the posted speed limit and be mindful of speed limit reductions within work zones.

Use Restraint Devices – Seat belts must be worn in both front and back seats if available. Children should be properly restrained in compliance with child passenger safety laws, www.buckleupnc.org.

Don’t Drive Distracted – Avoid any distraction(s) while driving that reduces your ability to drive safely.

Plan Ahead if Consuming Alcohol – Have a predetermined plan to arrive home safely by identifying a designated driver or by utilizing one of the many ride sharing services.

Reporting Dangerous Drivers or Other Emergencies – Motorists are encouraged to dial *HP(47) or 911 if they encounter a situation needing a law enforcement response.