KANSAS CITY, MO – Lauren Baker of Askewville can proudly say after all her trials and tribulations of life that she gave it her all.

Baker, a standout athlete at Lawrence Academy, transferred to Columbia International University (CIU, located in Columbia, SC) this year. She had not experienced a healthy season in four years. She had open heart surgery, tore her ACL and meniscus, had an emergency appendectomy, the COVID pandemic, and reinjured her ACL. This year she was finally healthy and earned the spot as the starting shortstop. 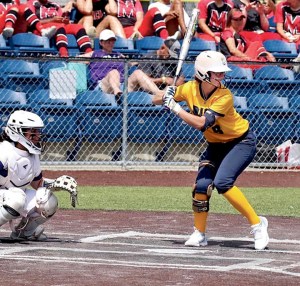 Lauren Baker had a banner season Columbia International University with a .331 battling average and a .922 fielding average, helping the team finish as the national runner-up in the National Christian College Athletic Association’s World Series. Contributed Photo

The team was then seeded third in the eight-team field with the top teams from all regions of the United States participating in the NCCAA World Series in Kansas City, Missouri on May 17-19. Teams from Florida, Texas, Oklahoma, Illinois, South Carolina, New York competed in the World Series.

In the World Series championship game, CIU jumped out to an early 2-0 leads thanks to Baker driving a pitch over the left field wall for a two-run homer. The Rams played well and Baker went 2-for-4 in the championship game and drove in three of her team’s four runs, but CIU fell short, losing 7-4 and finishing as the national runner-up.

Baker was named to both the South Region and World Series All Tournament teams. She hit .529 in the regionals and World Series, going 18-for-34 at the plate with 13 RBI’s. Baker also was awarded the Athletic Scholar by maintaining a perfect 4.0 GPA.

Additional Information may be found at https://ciurams.com/sports/softball/schedule/2022 and clicking on the recap of any of the South Regional Tournament or the World Series games. Baker also has information on her Facebook page, especially a post about the mental aspect of the game and the challenges she encountered this season after returning from her injuries.