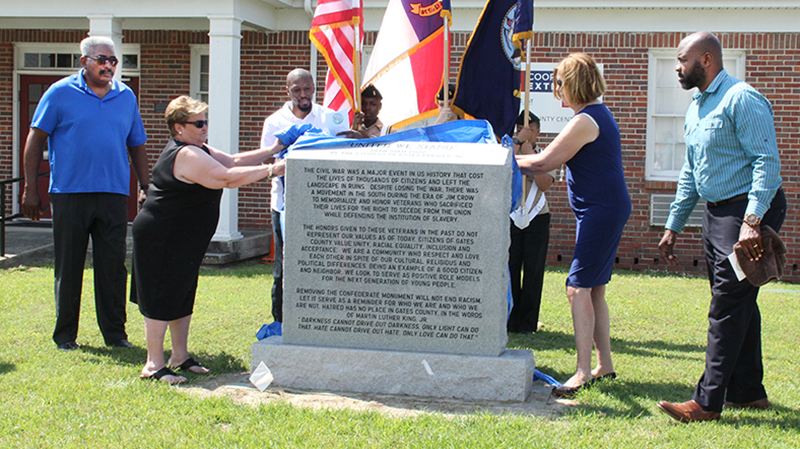 From left, Guy Holley, Betty Hora, Malcolm Sears Jr., Joyce Lassiter and Lee Brooks unveil the “United We Stand” monument during a May 21 ceremony in Gatesville. They, along with Deborah Lee (not shown), are members of a committee responsible for the creation of the monument. Staff Photo by Cal Bryant

GATESVILLE – Understand the past, embrace the present, and show love and caring in the future.

In a nutshell, that’s the purpose behind an effort to place a new monument on public property here across from the Historic Gates County Courthouse.

That new monument – “United We Stand” was formally unveiled Saturday morning. It comes after nearly two years of work by county officials and members of a diverse committee whose purpose was to recommend a solution toward resolving the issue of what to do with the county’s Confederate Monument, one erected in 1915. That committee recommended to leave the Confederate Monument intact and add a unity monument that heals past wounds and better reflects today’s diverse society.

Noted author Rev. Dr. Linwood Boone, a Gates County native who serves as the historian for the Roanoke Missionary Baptist Association, was the featured speaker at Saturday’s unveiling. He shared a chilling account of while the end result of the Civil War, to include the famous Emancipation Proclamation, may have freed Negro slaves, “it failed morally to free the white man, and by this failure it denied the Negro the moral status requisite for effective legal freedom.”

He stated that 1,300 white men from northeastern North Carolina opposed slavery and their state’s decision to succeed from the United States. They joined the Union Army.

“Gates County Union soldiers were from every part of the county: Gatesville, Hall, Holly Grove, Hunter’s Mill, Mintonville, and Reynoldson,” he noted. 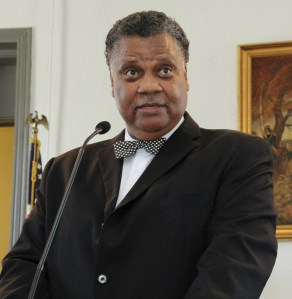 Rev. Dr. Linwood Boone was the featured speaker at a program held prior to the unveiling of the “United We Stand” monument on Saturday, May 21. Staff Photo by Cal Bryant

Boone said the goal of the ‘United We Stand’ monument is to “acknowledge these facts by working to remove the stinging rebuke of the past to bring about healing.”

He added that those who worked to bring about the monument possessed the “courage to unite in order to overcome prejudices and to deal with the inescapable consequences of the same.”

“This [monument] committee has made every effort to address that failure, to acknowledge the insidiousness of the past, to place the Balm of Gilead on the wounds, in an effort to move Gates County, North Carolina forward, without any regard to race, creed, color, gender,” Boone remarked.

He praised the efforts of Gates County’s current leaders and the members of the Monument Committee.

“You [leaders] have shown us that Gates County’s new future began when you accepted the responsibility not to remove the hate symbol of racism, but decided to tell the other half of the story from a different view point,” Boone remarked. “Gates County’s future shines bright as the colors of the rainbow following a violent storm.”

He mentioned that the unveiling of the Confederate monument that still stands today occurred 107 years ago.

“This monument is how we do things in Gates County; it’s our opportunity to say we do things differently here,” Boone concluded.

Lee Brooks, chair of the Monument Committee, thanked the county commissioners for addressing such a difficult topic.

“Thank you for trusting our committee and giving us the amazing opportunity to hold these difficult conversations,” Brooks stated. “We listened to our community about how they felt about the monument. We came back and talked about what we had heard and came to the conclusion that we are a unified community.

“We learned a lot of lessons about each other during our discussions,” Brooks continued. “We talked about race, about ethnic backgrounds, about how our childhoods were different. It was interesting to hear and see representation from all walks of life and how they personally dealt with this issue. We were able to transform those difficult conversations into a great final outcome. We have reached a level of unity within our diverse community.

“The steps we have taken to get to this point serves as an example to surrounding areas of how to deal with and build a loving and prosperous community,” Brooks concluded.