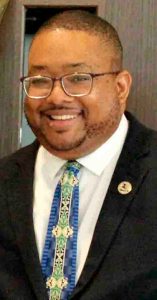 “It’s bittersweet for me,” said Dr. Wright in an interview on Monday with the R-C News-Herald. “We’ve been able to accomplish a lot here over my six and one-half years. This has been a special place, one where I’ve made lifetime friends and colleagues.”

Wright stressed there were no bad circumstances within HCPS that led him to seek employment elsewhere.

“There’s nothing wrong here; I’m not running away. It’s just that I was encouraged by a good friend of mine to apply for this position [in Sumter County],” Wright noted. “It’s an opportunity for me to help a larger group of children. I’m looking forward to that opportunity and the challenges of leading a larger school district.”

“In a district the size of Sumter, there are a lot more moving parts and a lot more opportunity for growth,” Wright stated. “That brings with it more challenges to face, but at the same time there is a much larger staff there to help tackle those challenges.”

Wright added that he will use the time he spent as an Assistant Superintendent in Harnett County (NC) Schools to help him prepare for the challenges of heading up a larger school district.

“Size wise, Harnett is a bit larger than Sumter,” he said. “That will help prepare me, but so will the fact that by being here in Hertford County in a small school district, I’ve had to put my hands on more things in the day-to-day operations.

“What I’m going to do is go down there and be the best leader I can be,” Wright continued. “I keep telling myself, and it’s good for anyone in a leadership role to think, good leadership transcends all. You lead with a passion to do the right thing. I’m there to do a job and that’s to look out for the best interests of the students and help prepare them to face the challenges of whatever they choose to do in life. That’s what I’ve done here; that’s what I plan to do there.”

When Wright arrived in Hertford County in December of 2015, he mapped out a plan for the local school district. Now that he’s leaving, he feels some sense of accomplishment.

“Data shows that we have improved in the area of student achievement, but I wanted us to reach a higher level,” he stressed. “We did establish a foundation that can be built upon.

“We have established our ‘Opportunity Culture’ program, which I feel will be a game changer,” Wright added. “That’s a way for us to continue to recruit teacher leaders. We’ve also made big strides with K-12 technology. And the crowning achievement is the fact that we just opened the new Ahoskie Elementary School as well as upgrading all our schools with climate control HVAC systems.”

Along the way, Wright said he learned the real meaning of living in a rural area where poverty is high.

“I thought I knew all about a rural environment growing up in Nash County, but I found out that it’s much different here,” he remarked. “What I learned about myself is assessing how to best serve rural, somewhat impoverished areas. I’m so much more aware of what rural communities need now that I’ve worked here.”

He also learned how to dig deep and overcome a personal battle against cancer at the same time he was leading the local school system during a period of great uncertainty.

“I was diagnosed with cancer in March of 2020, right when the COVID-19 pandemic hit,” Wright said. “Because of the blessing of my [school] board and my doctors, I was still able to lead during that time. I was greatly aided by my team, namely my assistant superintendent Tammi Ward. It was a seamless transition into and later back out of virtual learning.

“It’s been a special ride for me here in Hertford County,” he added. “While I’m looking forward to the next challenge, I feel blessed to have had led a great school district here, one that I strongly believe has a lot of potential.

“What I wish for is for the school board to select someone to build upon the foundation that have been laid. I have every expectation that the next leader of Hertford County Schools will take the district to even greater heights,” Wright concluded.

Dr. Wright arrived at HCPS on Dec. 1, 2015 from a similar position at McCormick County Schools in South Carolina.