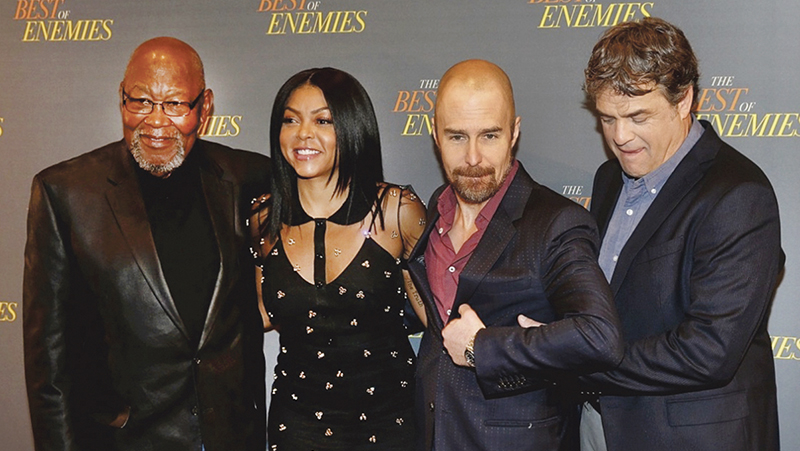 Bill Riddick (left) is pictured with cast members of the movie – “The Best of Enemies” – which include Taraji P. Henson and Sam Rockwell. Contributed Photo

AHOSKIE – A Hertford County native whose involvement in the integration of public schools in Durham is now the subject of a movie will return to his roots next month to share details of his life’s work.

Bill Riddick was born in the 1930’s and grew up in Como. He is portrayed in a movie showing on Netflix called “The Best of Enemies.” The movie, written and directed by veteran filmmaker Robin Bissell, is based on the 1996 book, “The Best of Enemies: Race and Redemption in the New South” by Osha Gray Davidson.

Riddick has accepted an invitation from officials at the Ahoskie Museum to attend an event on Saturday, June 4 where he will tell the story of how he became involved in the integration of Durham Public Schools. The June 4 event will be held outside, at No Man’s Land Park across the street from the Ahoskie Museum. It begins at 10 a.m. and the public is invited.

In case of inclement weather, the event will move indoors to First Presbyterian Church of Ahoskie (enter on the Church Street side of the building).

“I recently received a phone call from my son in Georgia, telling me of a movie, “The Best of Enemies” showing on Netflix and one of the main characters being portrayed in the movie is a man who grew up in Hertford County in the town of Como,” stated Pat Byrd, chair of the Ahoskie Woman’s Club History Museum. “This is something more people need to know about. Mr. Riddick, a man from our own Hertford County participated in changing our own history in North Carolina.”

Riddick graduated from NC A&T State University and earned a master’s degree at NC State University. He was working at his consulting firm in 1971 when he was contacted by Wilbur Hobby, a labor leader in Durham, asking him to lead the charrette in Durham which was federally funded and administered by the AFL-CIO.

The movie is based on that 10-day charrette, which featured Ann Atwater, a Black Activist in Durham, and C. P Ellis, the Exalted Cyclops of the Ku Klux Klan in Durham, serving together, but as polar opposites, on the subject of integration.

“I loved the movie,” stated Byrd, “but if I had to summarize the theme, I would say the story shows that kindness and loving your enemies really can change people’s minds and hearts. I hope people will come out on Saturday, June 4th at 10 am on Main Street in Ahoskie at No Man’s Land, at the corner of Main and Railroad Streets, to hear Mr. Riddick speak and then come across the street to see what else you may find in our museum.”