With no known opposition standing in his way later this year, current Bertie County Deputy Tyrone Ruffin will become the highest-ranking law enforcement officer in the county.

The unofficial results from Tuesday’s Primary saw Ruffin earn the majority approval of the Democratic voters as he topped the balloting in a three-man race to replace retiring Bertie County Sheriff John Holley. 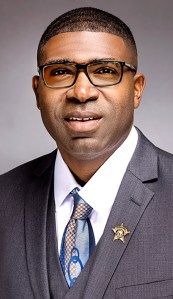 All three men are registered as Democrats.

The race boiled down to how the voters would react to a political newcomer (Ruffin…although he has 14 years of law enforcement experience) vs. a veteran (Atkins, with 36 years as a lawman, to include nearly a dozen years as Sheriff, and one term as a county commissioner).

Ruffin and Hardy finished in a tie (46 votes each) in the Snakebite precinct. Atkins received 17 votes there.

Ruffin was the most favored candidate in One-Stop (early voting). He received 833 votes during that part of the election process compared to 592 for Atkins and 325 for Hardy.

Holley, who has spent nearly 40 years in law enforcement – including three terms as Sheriff – announced his retirement late last year. His current term runs through November of this year.