Given annually, this award recognizes outstanding involvement, leadership, and achievement in Public Health.

Betts has spent his Public Health career at ARHS, dedicating nearly 28 years to his community and his colleagues. 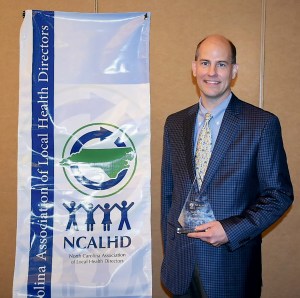 At a meeting in Raleigh on May 18, R. Battle Betts, Jr. received the prestigious North Carolina Health Director of the Year Award. Contributed Photo

His foresight and leadership ability not only allowed him to spearhead the effort for Gates County to join the ARHS district in 2004, but after being named Health Director in 2016, he also expanded the ARHS service area to include Hertford County in 2018.

“Battle provides leadership and support to staff and community resources, supporting increased efforts to protect and promote the health of the public. He has managed to keep an eight-county regional health agency working and serving as a cohesive unit that serves all the population as a whole but meets each county’s individual needs as well,” stated S. Michael Sutton, MD.

Betts not only invests in his community and service area, he is dedicated to the mission of Public Health across the entire state. As an active member of NCPHA and the Northeast NC Partnership for Public Health, he advocates for public health statewide. Betts serves on the Advocacy Committee, as well as holds the position of Vice-President of the Executive Committee, two leadership committees of the NC Association of Local Health Directors.

“As a fellow member of the NCALHD (North Carolina Association of Local Health Directors) Leadership Team, I have had the opportunity to work with Battle on a number of initiatives within our organization,” said Lillian Koontz, MPA, REHS, Davidson County Health Director. “Battle is a leader among leaders. He provides valuable insight and information to our group and does not hesitate to put in the necessary work. Battle fosters a culture of support and encourages involvement from membership to work towards initiatives; a true leader and supporter of collaboration.”

Under Betts’ leadership, ARHS has been applauded rigorously throughout the COVID-19 Pandemic Response for its efforts not only in case investigation, communication, education and outreach, but also the amazing work all ARHS employees accomplished in vaccinating the community.

The Elizabeth City Area Chamber of Commerce awarded ARHS and Betts with the 2021 Chairman’s Award; an award not given annually, as it is reserved for only the most prestigious situations.

Betts is a dedicated Public Health Champion who has devoted his life to the service of his community and his state in the promotion and assurance of healthier communities and healthier individuals.