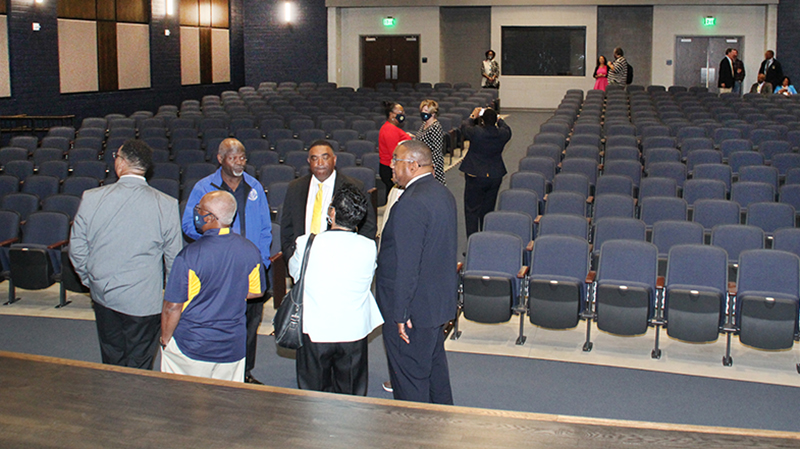 Members of the Hertford County Board of Education and Board of Commissioners joined with staff of Hertford County Schools on Thursday to tour the newly opened 350-seat auditorium located at the new Ahoskie Elementary. Staff Photo by Cal Bryant

AHOSKIE – A newly opened facility in Ahoskie boasts a dual role function: a venue for theatrical arts for school-age children and for community events.

On Thursday, officials from Hertford County Public Schools and the county’s local government gathered to formally open the auditorium at the new Ahoskie Elementary School. That 350-seat auditorium was added to the AES construction project, but was not fully completed when the new school opened in August of last year.

The spacious auditorium comes with two dressing rooms, a storage area for theatrical props and other items, and a roll-up door with direct access to the stage.

It also features a sound room capable of handling the audio/video components of a production or event on the main stage. Restrooms are conveniently located adjacent to the auditorium’s lobby.

Its close proximity to Hertford County High School and Bearfield Primary School is advantageous for those students to use the new auditorium. It can also be leased for community events.

“Although the auditorium is attached to this school, it is certainly something we believe to be a viable part of our community for years to come,” stated Hertford County Schools Superintendent Dr. William T. Wright Jr.

“We all worked collaboratively to get the job done,” he said. “Thank you all. We are excited about this project, this building and the learning environment created within these walls.”

Shelia Porter, chair of the Hertford County Board of Education, also shared her thanks to those who partnered with the school board on this project.

“Our [county] commissioners met with us often, even at Christmastime, and shared this dream of a new school and auditorium,” Porter said. “What we saw on paper is now a beautiful new building.

“We want the very best for our students, we want them to come into an environment that is conducive for learning,” Porter continued. “That learning environment is also found in this new auditorium with all the new technology in place there. Thanks to all those involved in making this dream come true.”

Ronald Gatling, chairman of the Hertford County Board of Commissioners, echoed Porter’s remarks about the improved educational environment within the new school and auditorium.

“There are greater opportunities here now to explore the theatrical arts and cultural arts that we can now bring to our students,” Gatling said. “Our children can express themselves and show their talents within this environment and learn about drama and theatre arts. We are so happy to be a part of this celebration.”

“It’s all about having the right people in the right place at the right time,” Dr. Wright stressed.

Tours of the new auditorium and school were held after the ribbon cutting ceremony.

The price tag of the new school, to include the auditorium, is $21 million. Hertford County’s investment is $6 million as they received a $15 million grant from the state’s Needs-Based Public School Capital Fund. 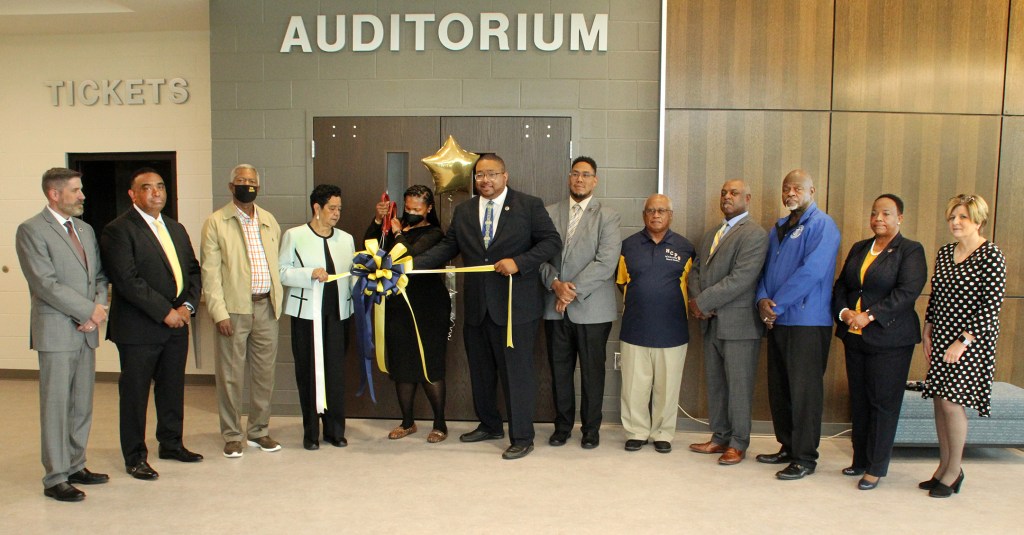