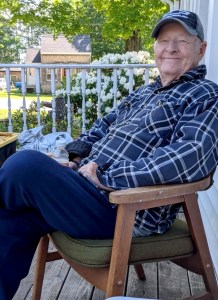 John was born 11/13/1934 to the late James and Doris Hoyt in Portland, ME. John attended Deering High School and graduated the class of 1952. He married his first wife, Sharon Burke, and had three children, Vicky (Roberts), Valorie, and Karen (Emond). On December 26, 1968 he married Carole Anne (Fournier), becoming stepdad to Carole’s two children, Maryellen Burdwood and Pamela (Burdwood-Hout). They had two children of their own, Deanna Kay and John Scott.

When John retired from Auburn Housing Authority, he and Carole moved to Ahoskie, NC. Retirement did not come easy to John, so he went back to work as a floor care technician at Roanoke-Chowan Hospital. Everyone who knew him could count on his pleasant smile and witty sense of humor to brighten their day and affectionately referred to him as “Mr. John”. After Carole’s death, John decided to make good on a dream he had to enjoy RV living, spending time in Roanoke Rapids, NC and Maine.

John loved a good western, war movies, whodunit shows, car shows, and the news. He would always bring a smile to your face when he’d ask, “What’s for desert?”

A man of few words, John’s biggest desire was to have a home near the beach where his family could gather together to enjoy the seaside, a place that was close to his heart and brought him peace.

John was predeceased by his wife Carole in 2015; his brother, David (in 2017 of Portland, ME); and is survived by a sister, Brenda McGlynn of Baltimore, MD. He is survived by his children; Vicky (James Steven Roberts of Naples, ME) and their children Jessica, Heather (Roberts-Hanson), James Jr., Shea; Valorie (longtime partner Glen Gaudin of Casco, ME); Karen (John Emond of Lewiston, ME) and their children Cassandra, Sasha, John, and Patrick; Deanna (longtime partner TJ Kozma of Scarborough, ME); John Scott (Stephanie of Crawfordville, FL whom John affectionately nicknamed “Skippy” after an epic card game of Uno) and their children, Ian, Xander, Ellianna, and Trinity; stepdaughters Maryellen Burdwood of Elgin, TX, and Pam Burdwood-Hout of Wintersville, OH and her children Michael, Matthew (deceased) and Mallory. He will be missed by many nieces, nephews, great-grandchildren, friends and associates.