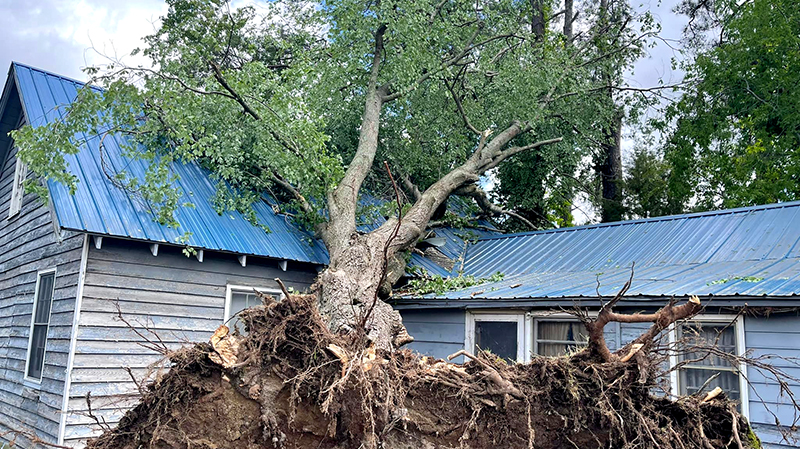 This tree was toppled by straight line winds onto the roof of a home in Roxobel during a thunderstorm on Friday night. Photo from Sandy Run Baptist Church Facebook page

“The one that caused the most significant damage impacted the Roxobel area at around 10 pm on Friday,” Cooper stated.

He said there was significant damage to two residences and one agricultural warehouse, as well as areas where fallen trees blocked local roads. Fortunately there were no reports of personal injury.

“There was an unoccupied house destroyed by a tree that fell during the storm,” Cooper said. “Another home, this one occupied, suffered damage due to a fallen tree. Neighbors and members of the Roxobel Volunteer Fire Department came to the assistance of that homeowner.”

Cooper documented and photographed the damage in the Roxobel area and sent those items to the National Weather Service Office in Wakefield, VA.

“They ruled out a tornado, rather saying it was straight line winds in the 80-to-85 mph range that caused the damage,” Cooper said.

“We did have a few tornado warnings when these storms impacted our area on Friday, but they were all radar indicated and if they were there, they apparently did not touch down,” Cooper added.

Straight line winds are thunderstorm winds that have no rotation, i.e. not a tornado, according to www.weather.gov. Downbursts are a common cause of wind damage from a thunderstorm. They can reach over 100 mph and are caused by air being dragged down by precipitation.