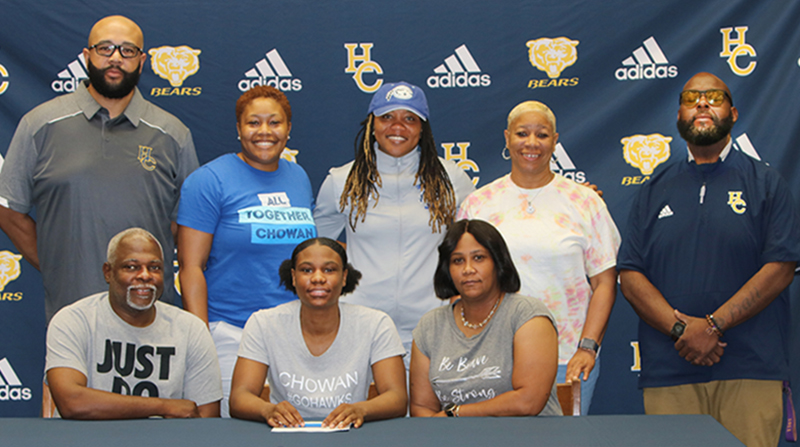 AHOSKIE – For the second time in as many years, Chowan University is tapping into the basketball talent pool here at Hertford County High School.

HCHS senior Desiree Askew has signed a scholarship to continue her education and compete athletically at Chowan. She becomes the second Hertford County basketball player to sign a scholarship with Chowan in successive years. Daylan Askew (no relation) just completed his freshman season as a member of Chowan’s men’s basketball program.

“It feels good about having the opportunity to play at the next level,” said Desiree Askew, who also had scholarship offers from Guilford College and Mid-Atlantic University.

At Chowan, Askew will join a program that saw vast improvement during the 2021-22 season under second year head coach Lenise Stallings. The Hawks finished the season with an 18-10 overall record (17-7 in conference play). They were 7-8 overall (7-7 in the league) the previous season, one that was impacted by the COVID-19 pandemic.

“I feel like I can fit right in with my style of play and make a contribution to the program,” Askew noted.

When asked what intrigued her the most about Chowan University and its athletic program,” Askew was quick to answer.

“The coaching staff,” she said.

Askew said she plans to major in Business Information Systems, with a minor in Cyber Security, at Chowan.

Askew stated she first gain an interest in basketball at the age of six where she played in the Ahoskie Youth Recreation leagues. She continued to hone her skills playing basketball at Hertford County Middle School and then at the high school level.

“It was a lot different in high school,” Askew stressed. “The pace was a lot faster and so was the intensity level. I had to adapt to that.”

“My coaches here, coach [Sha-Teisa] Sharpe and coach [Hermea] Pugh [Jr.] helped make me a better player and understand the overall game of basketball,” she said. “The support of my family and coach ‘Cowboy’ [Desmond Smith, the director of the town’s Youth Basketball program] were also a big reason for my success as a player.”

This past season was one of the best in the recent history of HCHS girls basketball where the Lady Bears posted a 23-4 overall record, which included a perfect 13-0 conference record and the regular season championship. Askew was the Conference and District Player of the Year as well as earning Third Team All-State honors. She was also the Conference Player of the Year during her sophomore season at HCHS.

“I started coaching here as an assistant when Desiree was a freshman, so I’ve watched her all this time as she developed her skills,” said Pugh, who just completed his first season as the head coach of the Lady Bears.

“Desiree is like a sponge, she absorbs what you are saying to her, what you are teaching her, and if she doesn’t understand she’ll ask a million questions in order to get it right,” Pugh continued. “You would think that someone with her skill set would be in it only for themselves, but Desiree was a great team player, very unselfish, she wanted to see the team have success and gave it 110 percent to make that happen.”

Pugh said he has no doubt that Askew will make an impact at the collegiate level.

“She’ll flourish because she’ll be surrounded by talented players. She’ll be able to get more comfortable with her game,” Pugh said.

And what does the future hold for Desiree Askew?

“More years of basketball…even beyond college,” she concluded.