Back on the screen

The Murfreesboro native and former Hertford County Deputy Sheriff, now turned actor, has a role in the new HBO Max Limited Series, “The Staircase.” The show covers the high-profile murder trial of American novelist Michael Peterson following the death of his wife, Kathleen Peterson, in 2001 in Durham, NC. 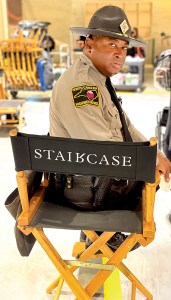 Aqeel Ash-Shakoor, a native of Murfreesboro, is quickly making a name for himself as an actor, to include a role as a law enforcement officer in the new HBO Max Limited Series, “The Staircase.” Contributed Photo

This marks Ash-Shakoor’s first HBO Max TV show role. He will play a North Carolina State Trooper in Episode 7 of the series that will air on Thursday, June 2.

“I was employed as a Hertford County Deputy Sheriff when this real life murder took place,” he recalled.

“My role in this series involves the ongoing investigation of the murder and the murder trial,” he added.

The Staircase will officially kick off with three full episodes and one new episode dropping each Thursday through June 9. The new show is based on the true story explored in the documentary of the same name.

For Ash-Shakoor, this is the latest of what has been a busy two years in front of the camera.

His first lead role in a feature film came last year in “Turn of the Cheek.” That film was released Aug. 29 on Vimeo on Demand. It’s a faith-based film centering on forgiveness that was written and directed by Janaya Black of Black-Smith Enterprises.

In May of 2021, Ash-Shakoor played the role of Willie, a neighborhood business man, in Renika McQueen’s edgy dramatic thriller, “Cain and Abel,” directed by Kamal Smith.

One month prior to that was the season premiere of “Smoking Good”, a TV series that Ash-Shakoor had a role.

Before making it in front of a TV/movie camera, Ash-Shakoor landed his first ever modeling job in May 2015 with the well-known Mid-West Fashion show, “Walk Fashion Show.” Since then, he has filmed several commercials on the national level, feature films, and short films. He has also co-starred in the popular “Chicago Med” on NBC and has been featured in other TV shows on the major networks, to include “The Chi.”

He is also scheduled to hit the big screen in the highly anticipated “SHIRLEY,” a feature film highlighting the life and presidential campaign of Shirley Chisholm. Ash-Shakoor will play legendary James Farmer, Chisholm’s opposing candidate.

“You may remember James Farmer as one of the students from the popular Wiley College debate team, for which the movie “The Great Debaters” was created starting Denzel Walker,” Ash-Shakoor noted.

At the present, SHIRLEY is set for a late 2022 to early 2023 release date. The film is now in post production.

After relocating his family and himself back in Hertford County in July 2000, Ash-Shakoor begin working as a Deputy Sheriff for the Hertford County Sheriff’s Office for the next seven years before returning to college to earn his Bachelors of Science Degree in Business Administration from Saint Paul’s College in Lawrenceville, VA and then earning his Masters of Science Degree in Criminal Justice from Everest University in Tampa, FL.

In 2010, Ash-Shakoor returned to North Carolina, employed by the Bertie County Probation and Parole Office.

Shortly after relocating to Lansing, MI in 2013, he and his wife graduated and received their Doctorate Degrees in Ministry from the Chaplaincy International Canadian Association (C.I.C.A.) University & Seminary, Houston, TX. They were appointed Ambassadors At-Large to the United Nations, and planted their church ministry, Walking With Christ Worship Center.