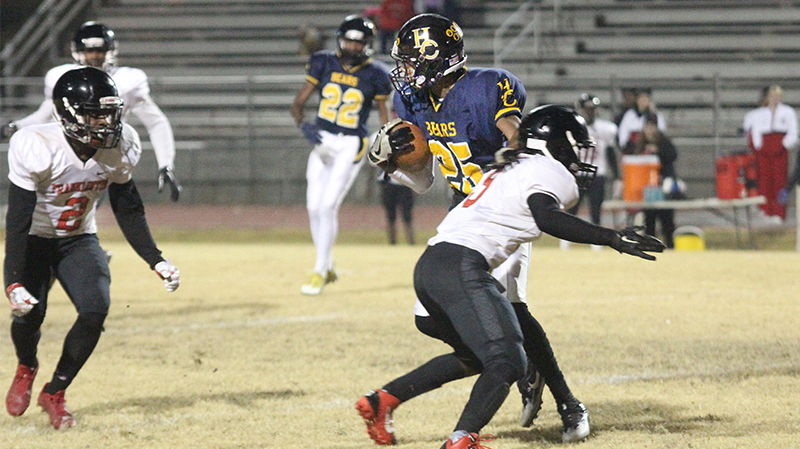 Jaquarii Roberson (with ball) slips past a would-be tackler in Hertford County High School’s state-play-off win over Franklinton in November of 2016. Roberson was a senior wide receiver on that team. File Photo / Cal Bryant

That’s the destination of former Hertford County High School standout Jaquarii Roberson who has signed a free agent contract with one of the NFL’s most storied franchises – the Dallas Cowboys.

“I’m excited about this opportunity,” said Roberson, a native of Murfreesboro who played collegiately at Wake Forest University where he wrapped up his final season by being named Second Team All-ACC as a wide receiver. “I’ve always wanted to compete at the highest level. As life goes on, I’ve always strived to be at the top, no matter the profession.”

After red-shirting during his freshman year at Wake, Roberson was part of a deep and talented stable of receivers. His playing time was limited during both his red-shirt freshman (2018: seven catches for 74 yards) and sophomore (six grabs for 80 yards and 1 TD) seasons. 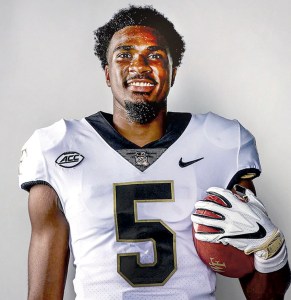 Roberson began to really make a name for himself during his junior season (2020) where he caught 62 passes for 926 yards and 8 TDs, including a career-best 80-yarder.

Those numbers were enough to keep Roberson as a possible selection in last week’s NFL Draft. He even had a pre-Draft workout with the Los Angeles Chargers as well as being invited to visit with the Cincinnati Bengals and Kansas City Chiefs.

However, Roberson’s name wasn’t called during the three-day Draft, held April 28-30 in Las Vegas. But a telephone call did come later from the Dallas Cowboys, one that landed Roberson a free agent contract as an undrafted player.

“No, my name wasn’t called on national TV, but I got a call from the Cowboys and have signed a contract with them,” Roberson said. “It’s still about the experience, the opportunity to compete at the next level. I’ve got to go and compete at my very best to earn my way, just like any other player, drafted or undrafted.”

Roberson reports to Dallas next week.

“It’s a rookie mini camp,” he said. “All of us will get a playbook and begin learning their system. We’ll also do some walk-throughs [of plays]. It will be a great way to get adjusted to a pro football environment.”

In closing, Roberson was asked what advice he would offer to those wanting to follow in his footsteps.

“Be smart and always have a plan,” he stressed. “Surround yourself with good people who can help you take the right direction in your life. And always remember to keep God first.”

The news of Roberson’s opportunity to play in the NFL was well received locally.

“We are all very proud of what Jaquarii has accomplished,” said HCHS head football coach Terrance Saxby. “It is great to see that all of his hard work has paid off and now he has an opportunity to live a dream. I hope he is an inspiration for the future Bear football players.”

“As a young 8th grader, I could see that he had the talent and capabilities to be an outstanding athlete and more importantly an incredible young man,” Simmons continued. “His strong work ethic helped him both on and off the field, and as proud as I am of his having an opportunity to play in the NFL, I am even more proud of his decision to stay and graduate from Wake Forest. We all wish him well as he continues in his pursuit of excellence.”

If Roberson, the son of Satoya Powell of Murfreesboro, makes the Cowboys active roster for the start of the 2022 season, he’ll join another Hertford County High grad as a current NFL player. Oshane Ximines (Class of 2014) is a linebacker in his fourth year with the New York Giants. The Cowboys and Giants compete in the same division (NFC East).